It is not easy being Tropical Freeze. Right out of the gate, it is a game that has to measure up to two of the greatest platformers to ever hit Nintendo’s consoles. The first is, of course, its marvelous predecessor: Donkey Kong Country Returns. A game that, on a generation that saw the rebirth of sidescrollers with the publishing of quite a few 2-D gems, was the finest example of how those simple and charming titles can compete and beat wide 3-D juggernauts with ridiculous budgets.

The second bar it will inevitably be compared to is one that lies on seemingly unreachable heights. If Donkey Kong Country Returns – as the first game of the franchise’s second run and a title that brought the simian back to the spotlight in great style – is the modern equivalent of the original Donkey Kong Country, then Tropical Freeze is expected to be the new Donkey Kong Country 2: Diddy Kong’s Quest, a title that is rightfully regarded both as legendary and as one of the finest, if not the greatest, sidescrolling platformer ever created.

Tropical Freeze, therefore, has to do what Diddy Kong’s Quest was able to do: build upon the virtues of its predecessor, fix its minor flaws, and tackle the extremely sensitive task of finding ways to take its level design and environment to brand new heights. It is a daunting task – some might say impossible – but two worlds into the adventure it is easy to see that Tropical Freeze has put a knife between its teeth and decided that if that is what it must do, it will try as hard as possible to succeed.

In the midst of its greatness, Donkey Kong Country Returns suffered from three basic flaws: an awfully generic soundtrack, boss battles that were simply unremarkable, and bonus areas that were bland and repetitive, especially when compared to the extremely fun timed mini-games that were hidden all over the stages of the second and third games of the Donkey Kong Country series.

All the criticism directed towards those hidden areas – which was mostly done by those who played the original trilogy and are full aware of how awesome Rare was in creating fun little challenges – seemingly flew right over the heads of the talented people of Retro Studios. Their structure remains unaltered. The game offers about five variations of rooms on which Donkey Kong must gather all bananas within thirty seconds in order to be awarded a puzzle piece. It is pretty much the same strategy employed by its predecessor and it is many leagues away from the stellar quality of Rare’s mini-games, which offered many different goals and whose structures changed in accordance to the level on which they were found. 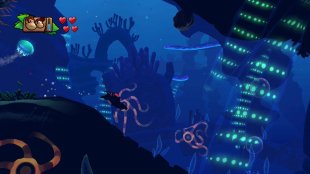 Fortunately, the other two issues of the game have been addressed spectacularly. The soundtrack, crafted by the gifted genius of David Wise is brilliant, and alternates between plain fun, tense, and atmospheric. In fact, the soundtrack is so good that Tropical Freeze is better experienced by turning down the sound effects to a minimum listenable volume and letting the songs take over. Within a dozen stages, players will most likely have a long list of favorite tunes.

Meanwhile, the overly simple boss battles of its predecessor have been replaced by multi-phase struggles that challenge even the most skilled players. Bosses are threatening and creative. They have a mighty arsenal of attacks that gets used to different effects in each of the battles’ phases, and defeating them is a matter of learning the quirks and tricks to each of the boss’ patterns.

When it comes to gameplay and level design, Tropical Freeze looks for small ways to stand out in relation to Returns, and it does so very well. Although its first world does not present anything truly fresh, from its second world onward the game utilizes elements that were nowhere to be seen on the Wii game and it builds stellar levels around them. Even old mechanics, such as the mine-cart and the rocket barrel star in stages that will blow players away with the smartness of their design and a hair-pulling level of challenge that is present from the get go – especially to those who want to collect all puzzle pieces and king letters hidden on each stage.

The main gameplay shift Tropical Freeze performs, though, is how Diddy, Dixie and Cranky aid Donkey Kong in unique ways. None of those characters can be controlled directly while on single-player, but as they ride on Donkey Kong’s back they provide him with abilities that, aside from helping in different ways, are occasionally used by Retro to build specific stage segments around those skills. Dixie’s ponytail helps DK gain altitude, Diddy’s jetpack makes him hover, and Cranky’s cane – by far the most unique of the abilities – can be used like a pogo stick that generates large jumps and avoids damage from spikes.

Tropical Freeze’s quality does not reside exclusively on its gameplay. It is also very evident on its visuals. Its scenarios are artistically mesmerizing, and the depth, detail and smoothness of all little items and elements is jaw-dropping. In fact, the game seems so aware of its visual prowess that it often treats players to segments on which the camera shifts from its traditional 2-D perspective to show the scenario in a new way.

In a way, those thrilling occasions are a key example of Nintendo and its partners’ philosophy towards gaming. After all, as the camera moves around, it creates a moment on which graphical fireworks, instead of existing for the sole purpose of a technical display, support a shift in gameplay, hence indicating that gameplay is the ingredient around which all of the game’s other elements must gravitate.

And that is why Tropical Freeze is so incredible. Although its music and graphics are fantastic, the star here is the level design and tight controls, and if the game wants to be compared to Diddy Kong’s Quest down the line, that is exactly the direction it should take as it slips the knife in between its teeth to accept the challenge from Rare’s 1995 timeless masterpiece.