Despite its occasional problems, it delivers an intriguing mix of adventure and rhythmic challenges 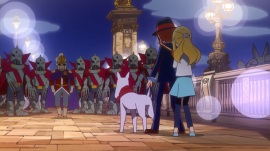 One of Sega’s first efforts on the Nintendo 3DS, Rhythm Thief and the Emperor’s Treasure, though completely original in its content, is not entirely new in its structure. Much like the Professor Layton franchise, that dressed up a puzzle game in a grand storyline and point-and-click exploration segments, it is a game that embraces one genre – in this case, rhythm-based mini-games – and complements it with a delightful universe, a solid plot, and plenty of cinematic cutscenes.

Taking place in modern-day Paris, it makes full use of numerous visual cues, not to mention major architectural and cultural staples. That French charm ends up naturally leaking into every aspect of the game, including the dialogues, soundtrack and script. The developers did a fantastic job in bringing the city to life, and they have achieved it through the blending of realistic settings with happenings that are as outlandish as the looseness of its cartoonish visuals allow for.

Raphael is a boy with a curious hobby. As Phantom R, one of the cities most wanted criminals, he sneaks into the museums of Paris at night, takes major works of art, and – for unknown reasons – returns them on the following days. Left behind by his father, who disappeared around the time the casket of Napoleon was stolen from Les Invalides, Raphael gets thrown in the midst of a treasure hunt around the city when, one day, after trying to get away following his latest theft, he bumps into a man who claims to be Napoleon as he attempts to abduct a girl. 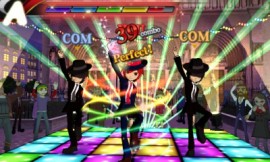 The adventure shown in Rhythm Thief and the Emperor’s Treasure mostly takes place during a treasure hunt around the streets of Paris as the characters involved on the plot scour the place in search of key relics. As a consequence, players will frequently be tapping on the screen, traveling between locations, and engaging in conversations with city dwellers.

The city has plenty of secrets to be found through the touch screen. Sounds, when recorded, can be used to help players solve puzzles and even unlock some extra secrets; musical notes – once fully gathered – also unlock extra content; and coins can be spent on a local shop in exchange for cutscenes and other items.

The game’s progression is pretty straightforward, as a handy map on the upper screen constantly indicates where to go next. To some, that aid will undoubtedly come off as severe hand-holding, and it does indeed harm the experience to some degree, for the whole exploration component of the game requires so little effort that it is hard to get fully immersed in the nicely written investigation that occupies pretty much half of the game’s main story length. 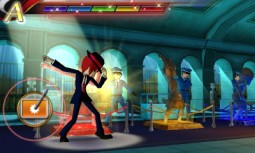 The real meat here, though, as the game’s title indicates, are the musical sections that punctuate the entire journey, and on that regard Rhythm Thief is almost flawless. The title comes packed with a whopping 50 rhythmic gauntlets that vary in theme, musical style, difficulty, and controls, offering a very wide array of mini-games that will please almost everybody while also providing a great challenge even to those who have played a large share of games of the sort.

Whether they are mandatory to the continuity of the main story, or optionals that are only accessed through interaction with minor NPCs, the activities Raphael and his friends must perform are, mostly, perfectly integrated into the plot. Seldom do they feel forced or lazily tacked on; they have been carefully designed to match what is going on at the moment, and on that regard the game is a resounding success, for it has a large number of truly visually and rhythmically exciting mini-games.

If characters are attacked by an army of baddies, Phantom R will have to beat them down to the rhythm; when making a glorious getaway, players will have to tap as platforms appear to the beat of the music; if a song must be played to unlock the secrets of a cathedral, it will be necessary to swipe the stylus right on cue with the movements of the violin; the wonderful list goes on and on.

The controls implemented for each of the songs are greatly varied, but they generally fall into three camps, either utilizing the touch screen, the system’s actual buttons, or its gyroscopic detection. The first two work wonderfully and it is an absolute joy to play mini-games that make use of them. However, the very few ones that require the 3DS to be tilted sideways can be painfully frustrating. The game sometimes will fail to recognize that the required movement has been made, and as a consequence it is not rare to fail a challenge or simply lose a combo due to one of those miscues.

Getting to the end of the story mode is relatively easy, and newcomers to the genre should not feel intimidated by it; the game welcomes them with a great and smooth difficulty curve. To those who want to get more out of the title than simply getting to the end of a very compelling plot, it is possible to attempt to get better scores and ranks on cleared songs that appear tightly organized into a practical menu. Hence, a ten-hour adventure can offer many more hours of gameplay to enthusiasts of the genre who want to face the daunting challenge of perfecting it the whole way through.

Unfortunately, in spite of its high replayability, Rhythm Thief possesses a scoring system that is a bit uneven as the rank it awards players after a performance is not influenced by the score. The rank is, actually, determined by a bar that slowly fills up as movements are made with the right timing, and any mistake will automatically make players lose almost one entire rank. 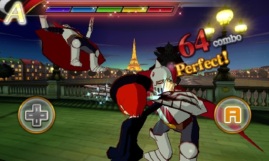 If that sole mistake is done during the early part of the level, the rank is easily recoverable. However, if the slip-up is committed on the very last moments of the dance, someone who has racked up one long combo and made just one mistake will likely have to be happy with a B rank in spite of the very high score. It is possible then to face a situation on which a performance with five mistakes made during its first phase might receive an A rank while one with a single fault on the waning seconds gets a B. It might sound like a silly flaw, but it can be an awfully frustrating development when struggling for a better grade.

The fact that the excellent rhythm sections punctuate exploration segments that are a little bit lackluster due to their simplicity means that the game has some problems with its pacing. While some of its chapters are loaded with mini-games, therefore bringing a good balance between the two faces of Rhythm Thief; others are heavier on the walking-around factor, which while being supported by an interesting plot are just not enough to hold one’s attention throughly.
Aside from static dialogue, the plot is also developed by a large number of cartoon cutscenes filled with details, special effects, and style. And although the writing sometimes stumbles on lines and moments that are far too cheesy, the twists and turns the script takes make up for a very pleasant ride filled with surprises, making players truly grow attached to the game’s great characters. 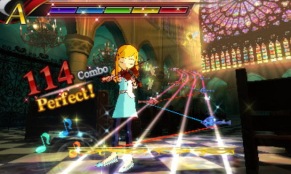 Rhythm Thief and the Emperor’s Treasure is, unquestionably, a little rough around the edges and it makes some mistakes in important areas. However, the overall package is highly recommendable. It turns what would have otherwise been a simple music game into something much bigger, and it is able to pull off an incredible integration between its rhythmical challenges and its plot.

It is accessible due to its difficulty curve, but brutally challenging to those who want full completion, and – consequently – Sega crafts an experience that will certainly be able to please both those who love the genre and the ones that are a little bit reluctant to get into it. It is a charming and lovable world, and – when the adventure is done – it is hard not to wish for an improved sequel.