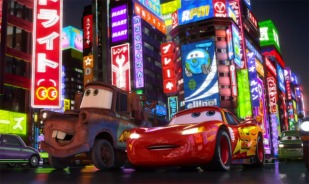 Out of the stellar collection of movies Pixar has crafted through its history, their 2006 release, Cars, was almost universally considered to have been their weakest outing. It naturally comes as a surprise, then, to find out that a company that has been historically averse to sequels – with the exception of their dearest child, Toy Story – decides to take it upon themselves to develop a follow-up for said film.

If there is one undeniably great thing to be mentioned about the Cars franchise, is that it generates a lot of revenue for Disney coming from an audience the company is often wrongly accused of overlooking: young boys. Therefore, being aware of both of these facts, it is hard to watch Cars 2 without the lingering suspicious that, in spite of what its producers have said, it is more of an attempt to boast the franchise’s merchandise sales than to make a traditional Pixar movie where viewers are overwhelmed by artistic value and brought to tears over a believable human script. And, when the movie finishes, it is impossible not to think of Cars 2 as a large-budget 90-minute hot wheels advertisement.

Radiator Springs, the charming heart-warming town that served as the core setting for the previous movie, is only seen in the very beginning of the flick and on the movie’s final minutes. Most of the plot takes place in a world racing championship that travels to Japan, Italy and England. Naturally, Lightning McQueen and Tow Mater are right in the middle of a competition that serves as the background of a worldwide conspiracy involving spies, shooting, explosions and gadgets that seem to come right out of a James Bond movie.

Because of this fast-paced nature, Cars 2 will have its great moments of family friendly entertainment; but whereas a lot of time is spent in racing and spying sequences, there is little attention paid to the character development that had always made Pixar’s movies stand out even from the motion pictures produced by the modern Disney Animation Studios. Truth be told, the writing crew did attempt to create an emotional ark or two through the movie, but it all comes off as unnatural and quickly put together.

Instead of having action sequences that serve the purpose of putting us at the edge of our seats for characters that we learned to love through their deep dialogue; Cars 2 does action because it looks cool, and tries to adapt character development to it. It is a decision that ties the hands of extremely talented writers, and obviously takes the Pixar spirit out of the whole thing.

While McQueen is busy with racing, Mater ends up gaining the spotlight, which means that the movie sets up many comic opportunities for the adorable silly tow truck to shine. The problem is that while as a second banana Mater proves to be an excellent character, the light that comes with being center stage reveals the reality of most personages that play second fiddle: they just cannot hold a film on their own. Hence, many rusty spots and weaknesses in the character are revealed, and after thirty minutes his jokes start falling flat on their faces.

With all that being said, Pixar’s movies are obviously judged much harder than animations coming from other companies. Cars 2 will always be successful in entertaining its audience: kids will adore it, racing lovers will be awed by the mesmerizing shots of the action, and parents will be happy.

Cars with human-like attitudes were, originally, a very difficult concept to pull off, but the first movie did it with some dignity. Here, though, when writers are severely limited by the glorified advertisement they need to deliver, that task borders on impossible. For many years, people wondered if there would ever come a day when Pixar would fail to deliver. With Cars 2, that day came to pass for the very first time, for it is clearly miles and miles away from what the company truly has the capacity to produce.