On the second part of this review of Nintendo’s showing at E3 2015, we continue to navigate through the mixed list of games the company had to display while trying to separate the good from the bad and looking ahead to see what those titles are bound to offer.

Next Level Games has an impeccable track record. Besides producing the most downright insane and fun games of the Mario Sports line – the Mario Strikers pair, the Canadian studio has also given the Luigi’s Mansion and Punch-Out franchises their very best outings. Therefore, they have more than earned the chance to work on a flagship Nintendo property. With that being said, there is no beating around the bush: Federation Force has come out of the gates looking like one dreadful mistake. Turning the Metroid franchise, a brand cherished for its meticulous exploration and sense of isolation, into a multiplayer shooter on which its signature character does not star is suicidal, especially considering the long lull that has followed the release of the most recent Metroid title, one that did not please many fans.

One might argue that, without the sacred Metroid Prime tag, the game might have been more warmly received, but initial trailers make it seem like a generic blip on a radar that is already saturated with space-based shooters. The Metroid franchise has never been a big seller, so perhaps – after looking at what the multiplayer madness of New Super Mario Bros. did for the already high sales of the plumber – Nintendo thought the online cooperative component could boost the Metroid franchise as well. However, such assumption is ridiculously out-of-line with what fans have been claiming for. At this point, the best those people can hope for is that the title does not fail hard enough to make Nintendo consider putting the franchise into hibernation for the wrong reasons.

After witnessing the damaging face-lifts undergone by Animal Crossing and Metroid, the Star Fox audience can let out a sigh of relief: Star Fox Zero is precisely what was expected, a vehicle-based interstellar opera where the titular team – with all its beloved original members – will soar through inhospitable planets shooting down bad guys and avoiding barrages of hazards. The graphics are still a bit on the clunky side and the Gamepad-centered controls, which have players trying to manage two screens at once, are reportedly a bit hard to get used to, but those are items that can be easily improved as development rolls along.

The sole confirmed letdown, albeit one that might still change, is the absence of a multiplayer mode: a valuable component on both Star Fox 64 and Star Fox Assault, and one that could have gained a lot from the current online infrastructure. Yet, that means Miyamoto and his team are hard at work on coming up with a single-player experience that captures the magic of the first two games of the saga, where a short adventure that could be finished in one sitting gained astounding amounts of replay value due to extra missions – each planet is confirmed to feature optional goals, challenges, and attempts at higher scores. 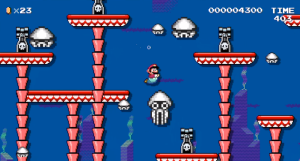 On last year’s E3, Super Mario Maker was announced as a rough sketch: not much was known about the game except for the fact it would allow players to create their own Super Mario stages. With that basic information, the game – which was born as an internal tool meant to be used within the company – was already looking like a must-buy title. It was only natural that, twelve months after its original reveal, Nintendo would unleash waves of juicy information regarding their latest Mushroom Kingdom effort. Armed with those new tidbits, it would not be bold to dub Super Mario Maker one of the greatest things to ever exist.

The game will support the use of the visual styles and gameplay elements of four decades’ worth of Super Mario goodness. Super Mario Bros., Super Mario Bros. 3, Super Mario World, and New Super Mario Bros. U will be reinvented by creative gamers that, with the aid of the efficient Gamepad touch screen, will be free to mesh hazards and enemies from the Mario universe in any way the see fit: Piranha Plants that shoot cannonballs are totally possible. The best part of what was shown at this year’s event, though, is by far the strong online component – the blood that will give oxygen to the whole experience. A powerful search tool, automatically assigned difficulty classifications, ratings, comments, course stats, and various lists of different natures (including stages recommended by Nintendo itself) will be available to give Super Mario Maker endless legs.

Unlike Metroid Prime: Federation Force, which transformed a signature franchise by ripping out all of its noteworthy characteristics, The Legend of Zelda: Tri Force Heroes is an intriguing twist on the Zelda gameplay. The New Super Mario Bros. syndrome – which sees the addition of multiplayer as a major marketing point to move more software copies – that afflicted both Metroid and Animal Crossing, games that thrive on being single-player, fits like a glove on the Zelda universe. The dungeon-focused gameplay will throw three differently colored Links into a puzzle-ridden maze and force them to cooperate through riddles and bosses to find their way out.

Having three characters that will need to work cooperatively, including the new ability to stack up to form a totem that will allow the heroes to reach new locations; and a clothing-based mechanic that will give each Link unique abilities according to the piece they opt to wear will likely create amazing opportunities for game design, something the team at Nintendo will undoubtedly take advantage of. While it is disappointing to see Nintendo lazily re-utilize assets from the fantastic A Link Between Worlds, a game whose weakest point was precisely its average art direction; Tri Force Heroes is bound to be a success if the company packs it with hordes of dungeons and a solid online mode that boosts replay value.

At this point, after having watched dozens of Xenoblade X trailers of the past eighteen months or so, all Nintendo fans wanted out of the company was a release date to the sequel of last generation’s greatest JRPG. As it turns out, that was exactly what the Big N gave us – alongside yet another breathtaking compilation of scenes from the incoming epic. Xenoblade X will hit the American market on December 4th, and anyone who has played its predecessor is already counting the days.

Based on the video, it is possible to tell X will follow tightly on the footsteps of Shulk’s gargantuan adventure: wide-open scenarios that stretch further than the eyes can see, a pleasant mixture of exploration and action-based battles, and a progression that pairs up elements of traditional Japanese role-playing games with the scope and freedom found in the very best MMOs. If all goes according to plan, Xenoblade X will certainly be the Wii U’s biggest game – at least up until the next Zelda comes around – and also one of the best. December cannot come soon enough.

From a purely artistic standpoint, The Legend of Zelda: The Wind Waker, Kirby’s Epic Yarn, and Super Mario World 2 all easily rank among the most beautiful games Nintendo has ever produced. From the looks of it, Yoshi’s Wooly World is not merely trying to reach that heavenly tier: it is trying to surpass it to stand on a ledge of art style perfection of its own. The latest trailer shows a presentation that is far beyond gorgeous and the seamless merger of cloth, yarn, and other elements with the Yoshi’s Island world seems like a match made in heaven.

It is more than graphics, though. Wooly World is apparently packed with excellent gameplay ideas. The traditional egg-throwing and transformation mechanics of the Yoshi games are complemented by fabric-based gimmicks that will undoubtedly be creatively used by the folks at Good-Feel, which will take the opportunity to expand on the charming tricks they implemented on Kirby’s Epic Yarn. Coming a month after Super Mario Maker, on October 16th, Yoshi’s Wooly World will give Wii U users an extra doses of sidescrolling greatness during the second semester.