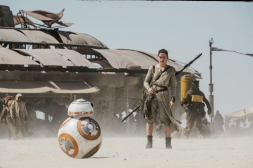 It is quite possible, and perhaps even highly probable, that never in the history of motion pictures has a film hit theaters with as much to prove as Star Wars: The Force Awakens. Thanks to the franchise’s absurd popularity, one that universally transcends barriers of age and genre, and the fact that it comes riding on the gigantic hype waves created by Disney’s masterful marketing machine, The Force Awakens arrives with the goal of meeting incredibly high expectations and, most importantly, proving that a formula that was born in the late 70s can still successfully support a satisfying move-going experience. Fortunately, like Han Solo on The Empire Strikes Back, director J. J. Abrams is able to steer that hard-to-maneuver ship through that trap-ridden asteroid field without much damage.

Luke Skywalker (Mark Hamill) has gone missing for unknown reasons, and with the threat of the First Order – mostly formed by remnants of the Empire – rising throughout the galaxy, the allies of the sole living Jedi are looking for clues that might indicate his whereabouts. The key to that riddle lies in a map held by a mysterious old man who lives in a hostile desert planet. And when that piece of information is discovered by both the Resistance – an armed force that supports the New Republic and that is led by General Leia Organa (Carrie Fischer), and the First Order itself – led by Kylo Ren (Adam Driver), a Sith of obscure origins – the wheels of the adventure start turning.

The greatest victory achieved by Abrams with The Force Awakens is how the movie recaptures the Star Wars spirit that was lost in the prequels. The premise of one valuable item that is sought after by two opposing sides triggers a wild chase through space that alters the destiny of the many characters it bumps onto, such as the likable and skilled scavenger Rey – played by a confident Daisy Ridley that is able to convey her personage’s growth and innocent brand of courage with perfection; the deserting Stormtrooper Finn (John Boyega), who starts having second thoughts about the First Order upon witnessing a bloody and cruel massacre executed by Kylo Ren; the Resistance’s ace pilot Poe Dameron (Oscar Isaac), originally sent by Leia after the map; and Han Solo (Harrison Ford).

Abrams, like a dedicated geek who decided to sit at home for days while looking for the ultimate answer to the question “What in the world made Star Wars so special in the first place?”, seems to have unearthed the truth, and The Force Awakens is a display of that. Gravitating around a plot that has characters in constant pursuit of one another, giving neither its stars nor its audience any reasonable time to catch a breath from the movie’s very first scene, are various sequences that feature exciting chases – either on-foot or aboard ships that defy the laws of physics, lightsaber duels, battles between blaster-wielding platoons, hide-and-seek games in space stations of gigantic proportions, swashbuckling adventure scenes with touches of humor, and silent tension – an element that is usually brought by the core plot occurrences.

The Force Awakens, therefore, feels like a pleasant compendium of distinct genres firmly held under the same umbrella: a space opera of epic scope. There is always something entertaining happening on the screen and the audience rides a wild roller coaster that has them alternating between laughing along the main characters’ tongue-in-cheek remarks and reactions, and being overtaken by the anxiety of worrying about the fate of the honest and humble people that are thrown right into the eye of a galactic hurricane that has – at its core – a struggle between the forces of good and evil.

The movie perfectly balances its darker, somber, and more serious palette – usually brought up by some very well-done and thoughtful character development and the mindlessly evil actions of its villains; with its light family movie tendencies, which shine brightly thanks to the reckless duo of Han Solo and Chewbacca, and Finn, a character that – despite his inner conflict and fear of the constantly omnipresent reach of the First Order – delivers a good deal of comic relief.

Upon studying episodes IV through VI, Abrams also seems to have noticed that technology and space were never at the center of what made Star Wars soar. They were but accessories that added charm and a unique setting to a story that was worthy of being told; the result of that conclusion is that The Force Awakens feels more human, candid, and powerful than the plagued prequels. The focus here is never on the flaunting of special effects or the construction of scenarios that could only exist in a very bizarre distant galaxy; the spotlight is always wisely set on the great dialogues and character interactions.

Abrams and his crew know that the most spectacular dogfights computers can generate do not have any weight or urgency to them when the reason for the battling is shallow; they are aware that the most mesmerizing scenarios machines can generate will have no life whatsoever if the stories that exist within them are dull, empty, and poorly developed; and they understand that fighting for the sake of the universe is not that compelling when the people that exist in it are not likable, human, and easy-to-relate. Therefore, they set their aim firstly on building a story that matters, and only then worry about its ornaments; that first vital goal is fully achieved through spectacular writing and by powerful performances by the entire cast.

Most of the scenes that make up The Force Awakens are pulled off in relatively mundane locations: an arid desert with touches of technology that are just about enough to make sure viewers realize this is an otherworldly tale; a dense forest and a snow-covered area that could reasonably exist right here on Earth; the metallic interior of spaceships; and, of course, a regular-looking, albeit overly rugged, cantina filled with oddly designed extraterrestrial creatures.

Technology and space are almost always present – this is Star Wars, after all – but they invariably take a backseat to the script; the product on which most of the efforts were placed. Computer-generated imagery is indeed utilized, especially on the breathtaking air combats and on a couple of remarkable characters, but Abrams’ crew mostly limits what appears on the screen to objects, gadgets, and settings that were actually built by careful and skilled hands; a decision that makes the movie as a whole more palpable, believable, and far less sterile. 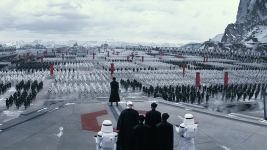 In spite of all the compliments it does deserve, a few issues keep The Force Awakens surpassing the mark of being an excellent movie and reaching for the masterpiece status. Although it is obvious that this new trilogy of flicks has at least another four hours to wrap up its plot in a satisfying way, The Force Awakens should feel like a complete rounded-up package; however, a few threads that are left hanging stop that from happening. The cause of the fact that the New Republic – winners of the war depicted on episodes IV, V, and VI – has no army of considerable size and needs to, thereby, rely on the Resistance, which looks and acts like a band of ragged rebels with little resources and improvised installations, for defense against a mighty First Order, which was born out of the war’s losing side, is not exposed on-screen.

The same applies for the elements surrounding Luke’s disappearance. The reasons behind it are indeed detailed. Sadly, they leave a lingering feeling that there is more to it than what is told, and given the search for the last Jedi is the movie’s main motivation – and the cause for much of the pain and suffering that is depicted, it is disappointing to see it go only half-told. Moreover, and perhaps even more gravely, the holding of the map that leads to Luke’s location (which is the object both sides desperately look for) by an old man in the middle of the desert is not explained, making the whole mystery come off, at least – and hopefully – until the other two movies arrive and make matters clearer, as a quickly put together plot device whose only purpose is to get the ball rolling.

The Force Awakens’ greatest sin, however, is how the bones of its script work as a mirror to what happened on A New Hope. It is possible that, by carefully studying the older movies, J.J. Abrams flew too close to the Sun and ended up drinking too heavily on that source. From a droid that is used to hide a map and that ends up finding an unlikely hero in the middle of the desert, to the final battle on a powerful space station, the parallels between both movies are so many and run so deep that they transcend the boundaries of Easter eggs and might make the movie feel, to some, like something that transits between a remake that uses different characters and distinct plot details to a copy that tries to succeed by riding on nostalgic references.

Surprisingly, considering their size and weight, those flaws do not ruin the movie; they merely hinder it, not allowing it to be as great as it could have truly been, a reality that is certainly frustrating. However, the bottom-line is that The Force Awakens succeeds spectacularly in recapturing the magic of the old Star Wars movies and proving that such structure can still work as the basis for an epic blockbuster that entertains a vast and varied audience.

It is emotionally poignant, both in terms of joy and sadness; expertly filmed, as many scenes are bound to go down in history as unforgettable pieces of movie-making; finely written, with strong dialogues and interactions popping up all through its running time; accurately acted, given the whole cast is working at the peak of their big capabilities; and relentlessly thrilling, with non-stop action and developments. It is a science-fiction flick as powerful and engaging as it can be. It introduces us to a cast of amazing characters that are bound to work as the central items in a fantastic trilogy that will only add to the franchise’s legacy, and maybe even surpass what was built by the three originals. With stumbles along the way, The Force Awakens sets the table and arranges the pieces to what will likely shape up to be an incredible series of movies.

8 thoughts on “Written In The Stars”