Through the entire history of gaming, developers have been so awfully efficient in coming up with mean ways to bring demise upon players that they could not all fit in a blog, or two for that matter. So here is another twelve – yeah, that many – painfully frustrating deaths one can experience right after turning on their gaming system. Welcome, once again, to an infuriating world that can lead to the destruction of controllers or the end of relationships.

The Deathtrap: You Make Me Lose My Head

Guilty as Charged: Games with chainsaws

At some point in time, authors of bloody thrillers looked at a chainsaw sitting in their backyard and thought to themselves: now there is a perfectly engineered killing machine. Some may naively think that chainsaws are actually constructed to cut down trees, remove obstructions from the roads, and even save lives; well, the gaming world and literature tell us that such assumptions are dead wrong.

They do it in such a traumatizing manner that paranoid gamers cannot hear the sound of one without wondering if they just stepped into one of those locations haunted by a chainsaw-wielding maniac. Both in life and in the virtual world such situation is a one-hit kill; fortunately, at least in the gaming world, there is always the opportunity to start over and try again. 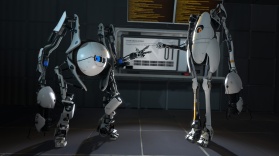 The Deathtrap: Friend or Foe

The terrible stress of teamwork: you have got to deal with personality issues, with people who do not do their job, and with that friend of yours that woke up in a bad mood. And if one of them is holding some sort of gun, watch out or they may mistake you for an enemy and bring you down in an instant, only to realize – one second later – that they just doomed their entire team by failing to tell the difference between a blue uniform and a red one.

As frustrating as that may be, it is always easy to forgive those who apologize for the mistake, as we – after all – are humans; however, there is always the chance you have been teamed up with someone who takes pride in killing teammates and sucking the joy out of the lives of their allies. It is just like winning the lottery, except that the chances of that happening are much higher and the feeling in the aftermath is not so pleasant.

The Deathtrap: I Am No Platform

With the utterly flooring commercial success of New Super Mario Bros. Wii, Nintendo ushered in a new era in which cooperative gameplay has become an inherent feature for every new sidescroller. Unbeknownst to many, though, the appealing option to play alongside others is an unstoppable killing machine craftily disguised as family-friendly entertainment.

Truthfully, cooperative sidescrollers can certainly generate their share of lovable moments and hilarious occurrences; however, they can also trigger violent arguments that have been lying dormant for a long time, just waiting for the right time to come up. And what better moment there is for those long-kept grudges to come up than when one character uses – as a final resort to avoid death – the other player’s character head as a platform to reach safe ground, causing the other to fall into a hot pit of lava or right into a space full of enemies. It is a death infused with so much evil that it could serve as a metaphor for wrecked relationships.

The Deathtrap: Slow Screen of Death

Lack of patience is the skilled player’s biggest enemy in platformers, and with that in mind Nintendo invented one of the most annoying mechanics of all time: the slow shifting screen. Those who have a lot of ability, driven to madness by the fact they will not be able to clear the stage as quickly as they normally would, will impatiently try to stay as close as possible to right edge of the screen, especially when replaying the stage multiple times either due to minor slip-ups or in a desperate search for missing collecitbles.

Obviously, such action can cause some infuriating deaths, as enemies popping out of nowhere and wrong guesses as to when the next safe platform will appear can instantly extend the time one spends in those stages by nicely sending players back to the starting point. On the other hand, sticking to the left is like staying dangerously close to a black hole that eats time, space and everything else in front of it, making things magically disappear or crushing characters against a wall when they least expect it. Next time, just stick to the middle.

The Deathtrap: Dazed and Confused

You are walking through a grass patch with your trusty Charizard resting inside his Pokéball, the sun is bright, the Pidgeys are singing and you can hear the pleasant sound of a creek running nearby. All of a sudden, you come across a Drowsy whose inability to stay awake tells you it cannot possibly beat your powerful monster.

Well, it turns out it can, because simply by confusing your fire-breathing dragon the sleepy Drowsy can cause Charizard to go on a lunatic streak where all it does is hit itself, instead of succeeding in unleashing one Fire Blast that would turn Drowsy into a pile of ashes in a second. The lesson of the day: do not ever underestimate a Pokémon armed with Confusion.

It is truly impressive how Artificial Intelligence has evolved during the past few years. Characters that in the past would do nothing but walk up to you while shooting madly now use crates for cover, hide behind other enemies when low in energy and do many other moves that keep surprising us. Still, for some reason we will never figure out, our CPU-controlled partners remain as dumb as they have ever been: as dumb as a door.

Instead of running, they get stuck behind pillars; instead of hiding, they hold up “Shoot me” signs and call all enemy attention upon them; instead of healing your severely injured character, they ignore your woes; and if you do not babysit them to your goal, things will go very wrong, forcing you to replay long segments even though you did not have anything to do with their stupid death. Their lack of intelligence has been the main cause for the increase of the virtual partner assassination numbers in recent years; after all, since they will make you return to the last checkpoint anyway, you might as well be guilty of the killing.

The Deathtrap: A Little Bit Too Late

Pacman is an extremely addictive score-driven game that does such a good job of immersing players into the whole thing that the overall theme of gluttony may end up consuming them in maddening ways. Look at the power pellets as the ultimate example. Eat one and all enemies become vulnerable for a short amount of time. If you manage to eat them all, the point prize will be more than sweet.

However, swallowing the four ghosts within the short time window can lead to some frantic finishes, such as when one inch away from your goal the effect of the pill wears off and the numb ghost turns into a menacing killing machine once again, and Pacman goes from one nearly fully satisfied dude to a very dead guy. At least the game sends out a beautiful message under all that frustration: kids, gluttony is bad for you.

As if endless pits, hordes of enemies, unbeatable bosses, foes that come out of nowhere and unexpected traps were not enough, Capcom also turned all spikes in the Mega Man series into deadly one-hit-kill nightmares. Being a robot, one would naturally expect Mega Man to either walk on spikes or be slightly hurt by them, but just like Superman has kryptonite, Mega Man has metallic spikes.

As a twisted turn, fully aware of the genius of their simple trap, the Capcom engineers made sure to place them in rather unusual places, usually making them come out of the blue and giving Mega Man little to no time whatsoever to react to its impending impalement.

The Deathtrap: See No Evil

If you cannot see it, that does not mean it cannot hurt you; on the contrary, not only does it have the ability to bring you pain, but it will also do so in a remarkably brutal and frustrating fashion. Games with poor camera inevitably end up hiding a lot, and while you struggle with the camera angle, enemies are taking advantage of that fatal design flaw to bring you down without much trouble.

It is not fair, and it is not a major achievement to those tricky baddies that brought you down, but they care neither about your troubles nor about taking advantage of bad programming. They simply are heartless men who want to tell their boss they have finally succeeded.

The Deathtrap: The Explosive Demise

The Super Smash Bros. series is constantly breaking the world record for most things happening on screen at the same time, even surpassing the Helm’s Deep scene in the second Lord of the Rings movie. It is hard to keep up with all the action, and more often than not you are thrown out of the stage without even knowing how that happened.

It is in the middle of this wild chaos where items drop every once in a while, and one of those items is a Bob-omb, which according to Murphy’s Law will invariably show up between you and your fighting friend, causing one of you to inadvertently punch it only to send everyone flying off the stage. The split second between the pressing of the punch button and the realization that a Bob-omb has just appeared is one of the most dramatic jiffies in gaming history, and it is usually followed by massive outbursts of laughter.

The Deathtrap: Losing My Ground

Chalk yet another one up for the Mega Man franchise. The wonderful world of pain unleashed whenever a game of the series is played would not be complete without its most ingenious trap: the disappearing platforms. Usually placed over bottomless pits or layers of spikes, they encompass Mega Man’s trial-and-error nature by generally not giving players a second chance: fail to leap between a series of vanishing platforms as fast and precisely as required, and Mega Man will have to start his journey through the stage from scratch.

Perhaps these platforms’ most terrifying feature is not even the fact they disappear, but the ominous beeps they emit in the process of showing up and suddenly vanishing; it is as if death itself walked with a bell around its neck and its sound drew ever closer as a warning sign of its immediate approach.

Thanks to themancalledscott for the suggestion.

The Deathtrap: Out of Time

When one sits to play a videogame, it can be asserted with great certainty that one of the reasons to do so is to escape from the annoying constraints of our mundane world: the stress, humanity’s ever increasing decay, and the general dullness of it all. It comes off as quite counterproductive, then, that a great number of games choose to bring into the virtual world one of life’s most annoying and infuriating characteristics: our general lack of time to do things with the due care and attention.

Timed stages, segments, and sometimes entire games are a painful reminder of that real-world issue, and even though some titles implement those timers in a way that gives players plenty of time to achieve what they desire, others opt to make the falling sands of time a constant cause for concern.

Thanks to revaryk for the suggestion!