It is not everyday gamers witness as a once proud franchise is purposely dismembered in front of their eyes; its qualities stripped away and replaced by mechanics that are the total opposite of its greatest features. With the constant production of successful games, companies tend to understand what is the reason behind the laurels those works receive, and so – as the game-design book on the production of sequels dictates – those quirks are preserved and built upon so that gamers keep on receiving the product they love so deeply, albeit with new creative twists and turns that help extend its freshness through multiple years and installments.

As one of the industry’s most long-lived companies and undoubtedly the one with the biggest experience in managing franchises that have been around for astounding periods of time, Nintendo knows that recipe well; more than that, they have been the ones responsible for setting in stone most of the strategies that can be employed in the healthy maintenance of intellectual properties. That is why it comes as a complete and utter shock that the game-producing giant has gruesomely mismanaged what was once one of its most universally acclaimed franchises: Paper Mario.

By now, the script is well-known. Born out of the ashes of Super Mario RPG, the Paper Mario saga was a surprising and resounding success. Nintendo’s internal studios, after all, had little to no experience handling games of the kind given their full-time dedication to platformers and exploratory adventures. Therefore, it was unlikely they would match the goodness delivered by Square with Mario’s role-playing debut, as that particular house towered over the genre’s realm with masterpieces such as Final Fantasy, Chrono Trigger, and Secret of Mana.

In order to keep the circus on the road, then, Nintendo made an obvious yet brilliant move, handing over the production of subsequent Mario RPGs to a partner that had a history with games that belonged to a neighboring niche: namely, respectively, Intelligent Systems and the Fire Emblem line of titles, a franchise that relied on both strategy and storytelling.

Born out of that move, Paper Mario (2001) and Paper Mario: The Thousand-Year Door (2004) were bright highlights in their home platforms and arguably stand as some of the best games Nintendo has ever put out. They offered a charming and artistic backstage look at the Mushroom Kingdom, allowing players to interact with various types of minions and minor characters that appeared as shallow sprites in Mario platformers; and catch a glimpse of the inner workings of Bowser’s army, Peach’s court, and other peripheral locations. They coupled that concept with brilliant writing, and role-playing concepts such as turn-based battles, a party of heroes, stats, items, and leveling up; all, obviously, sprinkled with Nintendo’s light-hearted and accessible touch.

The dismantling of that seemingly unstoppable juggernaut was done in parts. Firstly, Super Paper Mario (2007) took away the turn-based battles and all elements surrounding them; leaving the focus solely on the writing and exploration, which were strong enough to hold things together and deliver an enjoyable, yet inferior, experience. The brutal blow, however, came with Paper Mario: Sticker Star (2012) where the writing trod the line between dull and non-existent, the exploration was thin, and the battles were plain pointless given there was no such thing as leveling up. Paper Mario had suddenly transformed into a franchise that tried to find a balance between being a level-based platformer and a light RPG; the result was, unsurprisingly, a game with no identity or purpose and one of the worst first-party games in recent memory.

The announcement of Paper Mario: Color Splash a few days ago is exciting for it brings back the franchise to where it belongs: a home console. However, expectations are corroded by the looming possibility that it will be handled as a Sticker Star sequel, given that – despite its poor critical acclaim – the game sold relatively well. Color Splash is, then, moving towards two probable destinations: the rescuing of a sinking ship or the propagation of a gameplay style that was universally panned.

As available information is decidedly scarce, speculation and hopes are all that currently exist. Glimpses of the published trailer, though, reveal both reassuring and worrying insights. The latter category is populated by the absolutely gorgeous visuals, which take the traditional paper-crafted characters and scenarios to whole new levels of quality and artistic prowess; and the painting mechanic, a delightful new ability that lets Mario (like a mustachioed Amaterasu, the central character in the gorgeous Okami) restore the landscape around him, which is always an incredibly satisfying experience in games that look that fantastic.

When it comes to the worrying tidbits, there is the reveal of a level-selection map, the apparent abundance – or total domination – of Toads as non-playable characters, the return of stickers, and an omnipresent bucket that seems to act as Mario’s only partner. The first two items are harmful because Paper Mario, in its glory days, was a franchise that thrived in its world-building skills and in its clever structure as a book with distinct and independent chapters with their own storylines that were united by an overarching plot. The neat division into levels – instead of the presentation of multiple huge landscapes that work as the settings of a book’s chapters, each encompassing different kinds of characters and places tangled in a unique plot – works against the writing that is so vital to the franchise.

Meanwhile, the return of stickers and the existence of only one partner is a terrible outlook for the battle system. If Mario comes to rely on the collection of the former items so that he can deliver his attacks, like it happened on Sticker Star, Color Splash runs the risk of limiting players’ battle strategies to the stickers they have been able to gather; a reality that can get even more restricted if there is only one partner alongside whom Mario can battle.

The good news is that none of those negative indicators necessarily kill Color Splash’s chances of being a good game. The overall negative reception Sticker Star got may have helped Nintendo realize what the qualities that made the first Paper Mario titles so great in the first place were. A level-selection screen and Toads running around everywhere do not destroy the possibility that good writing and chapter-based storylines filled with unique characters will emerge; just like the sight of stickers and the display of a single partner do not mean battles will, once more, be yawn-inducing affairs. Nintendo may have found a way to integrate stickers into battles in a way that does not harm them, there might be more partners coming our way soon, and a level and stats-based character improvement system may have been re-implemented given almost everyone that played Sticker Star attacked its meaningless combats. 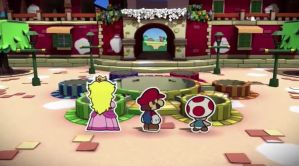 The path to the restoration, or to the maintenance, of a franchise is often not the one fans expect companies to take. In other words, it is possible that Nintendo has learned, through a negative experience, what the limits of the Paper Mario franchise are, and that Color Splash is an honest attempt to successfully integrate some failed elements of Sticker Star into the saga without bringing it down and leaving it devoid of personality. Or, of course, it could be the good old and stubborn Big N trying to prove, against all odds and feedback, that some of their obviously misguided ideas can actually work. The best one can do for now is hope that by not giving the people what they want, Nintendo will happen to actually give us what we have wanted all along.

4 thoughts on “Give the People What They Want”