Diddy Kong Racing is able to, with a great deal of charm and creativity, lift itself above the generic building blocks it uses 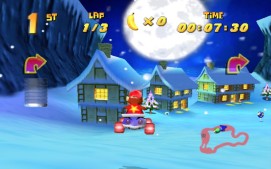 According to the norms established by Mario Kart, the franchise that invented the kart-racing genre and showed the world how successful and fun it could be, games of the sort should follow a specific recipe. Companies should get a group of recognizable characters that inhabit one or more universes in which racing is not a highlight, put them aboard simple karts with metal frames, place them in a bunch of courses of outlandish design and that are inspired by the games of origin of the racers, and allow competitors to break all fair-play rules by arming them with items that – in the real world – would cause brutal injuries, uncontrollable brawls, and arguments packed with inappropriate vocabulary.

With the discovery of such goldmine, many were the companies that jumped at the opportunity to put out a title of the kind; results, naturally, were of varied degrees of quality, with most heavily leaning towards the end of the spectrum reserved for poorly produced efforts that were nothing but quick cash-ins. Among the few that were indeed successful, Diddy Kong Racing – coming out just one year after the release of Mario Kart’s second installment – is one of the best and, unquestionably, the most original one.

Diddy Kong Racing does respect a bunch of the genre’s rules: a horde of colorful characters does race in wacky tracks while using items to gain an extra competitive edge. At the same time, though, either because it cannot follow them or because it chooses not do so, it overlooks many of those regulations. Mostly, such a fact comes as a blessing; on one occasion, however, it slightly hinders the game’s greatness. 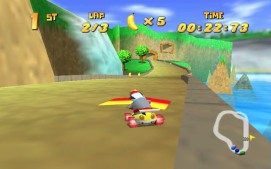 That one problem that arises is related to the word “recognizable”. In the building of Diddy Kong Racing, Rare only had access to a single character of worldwide fame: the starring monkey present in the game’s title. Truthfully, Banjo and Conker, of classic Nintendo 64 platformers that only arrived in the years following Diddy Kong Racing, are part of the group of ten racers (two of which are unlockable). And so is Krunch, a Kremling of King K. Rool’s pirate crew. Elsewhere, though, Rare was forced to fill up the game’s roster with critters – like Tiptup, the turtle; Timber, the tiger; Pipsy, the mouse; and Bumper, the badger – that while lovable and charming, are certainly not remarkable.

Perhaps realizing that their project did not have the benefit of dressing up its visuals and building its tracks with powerful references, Rare went out of its way to make Diddy Kong Racing unique. And they absolutely succeed in doing so. Not content with presenting kart-racing by the book, Rare pushes the title beyond that genre: Diddy Kong Racing actually offers a mixture of racing and adventure that cannot be found in any game that preceded it.

Timber’s parents, rulers of the island where Diddy Kong Racing happens, go on vacation and leave their son in charge, letting him race with his friends on the many courses of the region. In the meantime, a wizard pig from outer space shows up, locks all racing tracks behind sealed doors, corrupts the four animal guardians of the place, and promises to leave only if he is defeated in a race. It does not make any sense – no premise that leads to kart-racing really could – but the game does not spend more than a few seconds with it either. What matters is that the story sets the table for a blend of racing sprinkled with overworld exploration. 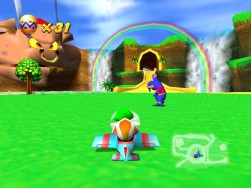 In total, the island has four worlds in the shape of lobbies surrounded by doors (with a fifth one becoming accessible later on). Players, then, have to locate the entrance to those lobbies, open them by acquiring a certain quantity of balloons (which are the rewards for winning races and that can also be punctually found around the overworld), and partake in the many varied challenges inside them. It is a simple setup, and it works wonderfully: there is a genuine sense of discovery in finding the entrance to the lobbies, even if the overworld is not that big, and the racing is simply a blast.

Smartly, the worlds pack more than standard races, otherwise Diddy Kong Racing’s single-player campaign would be miserably short. Gamers need to achieve victory in normal races in all four tracks; defeat the area’s boss in a frantic race; go through each course once more, this time collecting eight silver coins and trying to win in the process; and, finally, face a tougher version of the boss. Additionally, there is also a point-based four-race championship and a battle stage, which is unlocked by finding a golden key that is hidden in one of the lobby’s four tracks.

All of those challenges are genuinely fun. The initial standard races shine because Diddy Kong Racing’s tracks, despite not being located in famous settings, are excellent, centering around somewhat commonplace themes like dinosaurs, a volcano, a lagoon, a medieval village, and space. With the track design learned and victory attained, the coin-collecting races up the stakes considerably, featuring coins that have been placed in devilish locations that, unfortunately, sometimes come off as cheap. At last, racing against big-sized animals in especially designed stages is a thrill; and the battle levels, including combat via items and variations of capture-the-flag, are entertaining breaks from the norm. 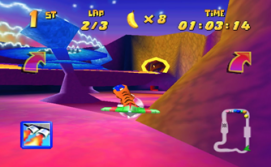 Another rule that is broken by Diddy Kong Racing is how it explores a couple of vehicles other than the simple kart: the airplane and the hovercraft. It is a feature that, besides the adventure mode, happens to be the game’s signature component, as tracks are set up with one of the three vehicles in mind, even if – during multiplayer sessions – players can individually choose, if the track allows, which vehicle they will use. Although the plane and the kart are relatively easy to control, with the former even being able to perform loops, the hovercraft offers a steeper learning curve, as it can be easy to lose control of it during sharp turns until gamers get its quirky physics down.

As a final, and simple, new twist, Diddy Kong Racing’s implementation of items is quite different from the one that is seen in Mario Kart. Firstly, the color of the balloons indicates the item they carry (the blue one, for example, hands out a boost), allowing players to pretty much choose what they will pick up. Moreover, items can be powered-up by running over equally colored balloons while not using the items. A single missile, for instance, becomes a set of ten if racers go through three red balloons. Not only do such measures remove luck from the equation, as the entire field of eight racers can get whatever items they choose to, it adds a good layer of strategy to the competition.

The game also excels in its technical department. Graphically, it replaces the dull sprites of Mario Kart 64 with very good 3-D models that are bursting with personality, and features scenarios that are exploding with bright beautiful colors – reaching an almost psychedelic extravaganza in the space world. In terms of sound, although the repetitive sound effects emitted by characters do get a little annoying, the music is masterful, as David Wise penned one specific tune for each of the twenty tracks, and their quality is generally high. 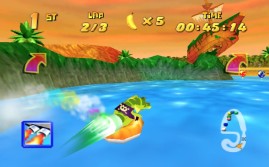 Diddy Kong Racing is able to, then, lift itself above the generic building blocks it uses. Differently from most kart-racing games, it may not be stacked with recognizable brands, characters, and assets, a reality that is slightly harmful to the overall experience. However, Rare – in the midst of a breathtaking streak of creativity – was able to infuse the title with enough content, genuine challenge, and refreshing ideas to transform it into the Nintendo 64’s most fun racing effort and one of the few games of its genre that rightfully deserves to be placed alongside the best entries of the Mario Kart franchise. That, in itself, is a feat that reveals a lot about the degrees of creativity and dedication that were employed in the game’s making.