Mega Man 2 rises on the horizon like a lighthouse: a point of reference that has guided the uncountable sequels of the series and all games that have tried to emulate its formula 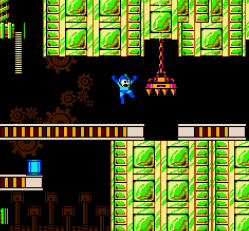 As the number attached to its title indicates, Mega Man 2 did not mark the inception of what is now a long-standing franchise that is so popular and recognizable its name and main character are integral components of gaming as a whole. However, despite the fact it is not the Blue Bomber’s first adventure, Mega Man 2 rises on the horizon like a lighthouse: a point of reference that has guided not only the uncountable sequels of the series but all of the games that have tried, fully or partially, to emulate the remarkably iconic structure and gameplay the saga coined. More than a blueprint and a source of inspiration, though, Mega Man 2 is the bar against which all those efforts are measured, and it is easy to see why.

Mega Man 2 is so tightly built around the bones set up by its predecessor that even its plot is similar, as it features one helper robot turned fighter – the titular Mega Man – having to deal with an army of evil bots that are trying to take over the world. Differently from what happened in the original, however, when the ill-intentioned Dr. Wily stole and reprogrammed the once helpful humanoid machines Dr. Light had created to aid humans in civil construction, Mega Man 2 shows Dr. Wily reemerging from the wreckage in which Mega Man had left him with a horde of robots of his own.

Despite that distinction, the formula here is the same: the eight Robot Masters, versus the original’s six, lie in wait for Mega Man at the end of stages whose themes are perfectly lined up with its boss’s personality, meaning that, for example, Wood Man lurks inside a base constructed in a forest and Air Man takes the action skyward. Once more, after making it all the way to the end of the level, facing its leader, and destroying him, Mega Man inherits the subject’s weapon, allowing him to use it against both regular enemies and other Robot Masters, something that can be quite helpful given each boss has a specific weakness in relation to a certain weapon. 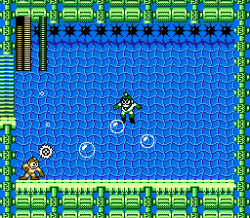 Since players are free to choose the Robot Master they want to face, such vulnerability creates what is perhaps the game’s most well-known twist: the invaluable importance of figuring out the best stage-clearing order. The delight of such freedom is closely related to how hard Mega Man games are: getting through the levels is brutal, as they are filled with tough enemies and mean obstacles that can degenerate into trial-and-error; and having to defeat a boss that has powerful attacks and high resistance against most weapons after overcoming a real gauntlet is no easy task. Therefore, given once Mega Man runs out of lives – which are scarce – players lose the mid-stage checkpoint and are forced to start the level from scratch, knowing how to easily dispose of bosses can be the difference between beating the stage and having to restart.

Mega Man 2, then, like all games in the franchise’s main line of titles, is a grinding exercise of slowly figuring out how to make one’s way through the stage, as its hard platforming challenges will cause numerous deaths and require that levels be learned piece by piece; and testing acquired weapons against its boss to see if any of them will work, or simply tackling the daunting – but doable – task of learning the Robot Masters’ frantic patterns and trying to take them down with the standard blaster. It sounds frustrating, and indeed it can be so punctually, but it is thoroughly engaging and fun.

These qualities appear because Mega Man games bring a feeling of constant progress, as every part of the stage that is learned and every weapon that is tested on a boss (successfully or unsuccessfully) moves players one step closer to their ultimate goal of stopping Dr. Wily. In Mega Man 2, though, they are noticeably pronounced – more than on any other point in the series, perhaps – for three reasons. 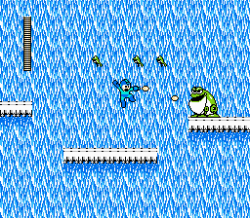 Firstly, there is how Mega Man 2 improves on what was established by its prequel. Energy Tanks, which allow the hero to recover his health, are not abundant enough to turn the game into a walk in the park but do show up often enough to make it more manageable; the adjustable difficulty that is present in the game’s American version (gamers can choose between Easy and Difficult) goes a long way towards making the title more accessible; a password system, which produces a specific code whenever a Robot Master is defeated, allows players to save their progress; unlockable weapons, which produce different sorts of platforms and are given to Mega Man after beating a certain number of bosses, are rather useful; and controls and physics are noticeably better.

Secondly, Mega Man 2 turns the Robot Masters’ weapons into a more vital part of the game, making them important outside boss encounters. Crash Man’s bomb, for example, blows up walls that block easier paths or hide extra lives and energy tanks; meanwhile, Flash Man’s time stopper and Wood Man’s leaf shield can make tight scenarios, either in terms of platforming or enemies, into much easier affairs. Pretty much all eleven weapons, including the three awarded to Mega Man by Dr. Light, are helpful at certain points in the game, a fact that adds yet another layer of strategy to the order in which players will tackle the levels, as items can be missed or situations can be especially brutal if Mega Man has yet to defeat a specific Robot Master and acquire his weapon; and that gives the game good replay value.

Finally, there is how, for the most part, Mega Man 2’s levels are brilliantly designed – balancing demands for tight jumps and fast reactions with lots of action and shooting – and visually distinct from one another, as the eight Robot Masters support the creation of very nice scenarios that while not as good as those of Super Mario Bros. 3 or Kirby’s Adventure, come very close to the best ones the NES offered during its lifetime. Truth be told, Capcom does occasionally take its design of traps to ridiculous extremes (as it happens in Heat Man’s disappearing platforms above deadly lava; in Quick Man’s deadly lasers that require absolutely perfect reaction times; in Bubble Man’s spikes that seem to come out of nowhere; or in some of the six final stages, which take place inside Dr. Wily’s Castle and that must be beaten linearly). However, the good and impressive far outweighs the bad. 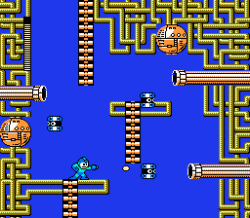 Mega Man 2, therefore, stands as a point of reference not because it is the best game in the saga; as such a ranking is especially subjective in a series whose entries are similar to one another. It achieves that status because it marked the first point in time when all of the franchise’s qualities – its untouchable and uncannily perfect soundtrack, its great 8-bit visuals, its signature structure, its brutal difficulty, its constant sense of progress, and its balance of platforming and action – came together to form one spectacular product. Future installments, such as Mega Man 3, may have polished up a few edges to a finer degree, but it was in Mega Man 2 that these delightful pieces first formed a complete and compelling picture.