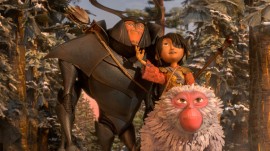 Moviemaking in all its formats and flavors is impressive in itself. However, as magical as it is to lock actors and directors inside a huge studio and have them come out of there with a film roll containing journeys into outer space or voyages into impossible worlds, the field of animation may be even more impressive, for its starting point is a nothingness of white that needs to filled up from ground zero. And, as far as animated features go, none are as mesmerizing as those using the stop-motion technique; after all, it takes unmeasurable heights of patience and dedication to build a world out of clay models and produce a full-length picture by moving them inch by inch and capturing each shift in motion as a photograph before putting it all together.

On the heels of the widely embraced Coraline, ParaNorman, and The Boxtrolls, the minds inside the American studio Laika deservedly became the kings of that production style. Kubo and the Two Strings is the fourth entry in their filmography, and – for all effects and purposes – it might as well be the best of the bunch; an undoubtedly heavy statement considering what came before it.

Kubo is a one-eyed boy who lives with his ill mother inside a cave that lies tucked away from any contact with civilization. He daily visits the local village to tell stories using a magical shamisen that breathes life into sheets of paper, turning them into origami that recreate the tale that is being narrated. Kubo, however, always cuts his stories short, leaving the gasping audience without their coveted ending, as he rushes home to get there before it is dark, as his mother has forbidden him to stay out after the sun sets. 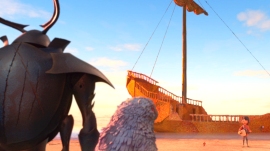 One day, though, after witnessing a ceremony in which people get in touch with their deceased loved ones by lighting up lanterns, Kubo tries to communicate with his dead father, fails to do so, and ends up staying out after dark. Right as the sun sets, he discovers the reason why his mother was so adamant about him avoiding the nighttime and sees himself forced to go on a journey in which he will discover not only the truth about himself and his missing eye, but also the backstory of his family.

In its heart, Kubo and the Two Strings is a straight-up action-adventure movie. Kubo and his traveling companions must collect the three pieces of a legendary armor that will grant its owner impressive powers. Naturally, such a journey will send the hero through breathtaking scenarios that are adorned with computer-generated backgrounds and effects, and have him in a collision course with ominous dangers that are occasionally so big and complex it is hard to fathom they were actually physically built and animated inside a massive warehouse.

However, there is much more to Kubo and the Two Strings than sword battles, daring escapes from devilish creatures, and the traversing of obstacles that seem impassable; although the movie does do those elements as spectacularly well as it possibly could, delivering it all with an uncannily smooth blend of stop-motion and CGI (employed only punctually) that had never before been attempted by the studio. Kubo and the Two Strings’ main thread is actually its story, for it is what keeps viewers engaged and lends depth to its flashy happenings.

As Kubo is on the village’s square telling his story, he states “If you must blink, do it now. Pay careful attention to everything you see and hear, no matter how unusual it may seem” and that could apply to the picture as a whole. As Kubo sets out on his quest, he is unaware of the story of his family, as he has only received vague explanations from his ailing mother regarding his dead father, her two sisters, and his grandfather. However, the closer Kubo gets to acquiring the armor, the more he learns about the strings that tie all the pieces together; and the more it is revealed, the darker the movie gets, which is a progression that walks hand in hand with the flick’s increasingly somber visual tone.

If Pixar movies cleverly appeal to both adults and children by presenting levels of strong messages under the visual sugarcoating, Laika – here – does something somewhat similar. The difference is that the line they choose to walk is a far more dangerous one, because not only does Kubo and the Two Strings carries its heaviest themes more blatantly on its sleeve, it also deals with emotionally charged subjects; at times, even feeling like a Studio Ghibli work, one that is an adult movie disguised as a beautiful and appealing animation.

The film’s greatest achievement, though, is how it refuses to play down to its younger audience; as it chooses to take a more elevated ground and carefully guide children through its toughest subjects. And Kubo and the Two Strings gets to the other side of that road successfully, delivering a message of how family bonds – or any links created upon the foundation of pure love – can overcome all and survive the harshest hits; and effectively proving, even if it is through fantasy fiction, that the strength of those strings that unite people have character-building and healing powers. 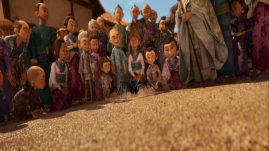 Kubo and the Two Strings, therefore, is not just a work of art and love that dares its viewers to wonder how such a magnanimous picture could have been created out of physical character models and hand-built scenarios. It is actually a movie whose lesson is handled so delicately and landed with such positive power that questions regarding its making fall to the wayside when the lights are turned back on. Kubo and the Two Strings goes to emotional depths Laika had barely touched with its previous efforts, and by doing so in such a spectacular way, it takes the studio to a whole new level. We can only lie in wait to see where they will take us next.

4 thoughts on “Strength Of Strings”