It shifts its focus away from what made the franchise unique and directs its attention towards action-platforming, stripping a portion of its originality and leaving it adrift among a sea of similar titles 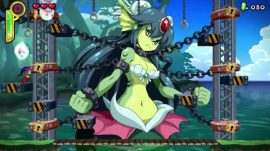 Supported by a devoted fanbase that poured their hearts and hard-earned cash into a successful Kickstarter campaign, the Shantae franchise leaps from its handheld origins towards home consoles with its fourth installment: Half-Genie Hero. As a series that, with each passing game, slowly polished the edges of its unique gameplay style, culminating with the spectacular The Pirate’s Curse, one could expect Half-Genie Hero to be a continuation of the process; a game that would lean over the few lessons learned and improvement opportunities found in its prequel and catapult Shantae to a new-found level of greatness. However, even though the game does attempt to stretch its wings further than ever before – perhaps to make it more suitable for the bigger stage upon it now sits – Half-Genie Hero comes off as one step sideways and one step back instead of an evolution.

Through its first three installments, the Shantae games built their legacy upon a clever mixture of action-based platforming, Metroid-inspired backtracking, and a series of dungeons that recalled those of the Zelda series – albeit from a sidescrolling perspective. The hero would traverse lengthy and maze-like stages while beating enemies down, locate roadblocks in the form of characters in need of items or impossible-to-overcome obstacles, go back to find the necessary assets to proceed, and eventually reach smartly designed dungeons. It was a combination that worked not only because it was spectacular, but also due to the fact it lent the saga a great deal of originality, making it a one-of-a-kind platformer.

When Shantae’s uncle builds a machine that is meat to aid his niece in the daunting task she has as a half-genie guardian of protecting Scuttle Town, only to have it stolen by the pirate Risky Boots, Shantae must go out into the world to discover what her rival is up to. What players encounter as the character steps into the many locations of Sequin Land, though, is considerably different from what was brought to the table by the game’s most recent prequel.

Under a purely positive light, Half-Genie Hero greatly benefits from its encounter with high-definition platforms. The game abandons the lovely pixelated sprites that had accompanied the franchise since its inception, and replaces them with gorgeous hand-drawn models placed in front of nice and layered tridimensional backgrounds. The game moves with uncanny fluidity, and even though some of its menus and other secondary parts of its visual presentation are a bit dull, the in-game graphics are a top-notch work of art that stands shoulder to shoulder with the best-looking platformers of the past few years, such as Rayman Legends.

Half-Genie Hero will also please both newcomers, and especially longtime fans, by bringing back the character’s signature move: Shantae’s dance transformations, which were absent from The Pirate’s Curse due to story-related reasons and that had been replaced by obtainable pieces of equipment. Aside from jumping, running, and using her long ponytail to whip enemies to a shampooed oblivion, Scuttle Town’s guardian has, at her disposal, a whopping eight transformations, which are acquired as the game progresses.

Shantae can turn into a monkey in order to climb walls; an elephant that lets her smash huge concrete blocks; a crab that can squeeze into tight underwater spaces; a mermaid that swims freely and quickly; a harpy with impressive flying abilities; a spider that latches onto the ceiling; a bat that flies in a straight horizontal line; and a mouse for sneaking into narrow mazes. All of the transformations are as charming and fun as they sound; additionally, as expected with such an impressive array of skills, they allow developers to implement roadblocks and platforming scenarios of varied natures, hence creating an opportunity for the game to explore a wide palette of challenges and sustain fresh gameplay through the entirety of its running time. 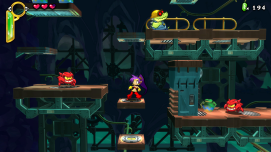 The thing is, however, that Half-Genie Hero fails to capitalize on that scenario; Shantae’s arsenal leaves the door to a room full of alluring toys wide open, and WayForward mostly ignores it. That happens because, surprisingly, Half-Genie Hero somewhat abandons the Metroid-style exploration while also not implementing a single Zelda-inspired dungeon. The game shifts its focus away from what made the franchise unique and directs its attention towards straightforward action-platforming, which ends up stripping a considerable portion of its originality and leaving it adrift among a sea of similar titles.

Besides Scuttle Town – which works as a hub where Shantae can buy items, upgrades, and look for information regarding where to go next – Half-Genie Hero contains six worlds that are actually formed by two or three levels played in succession and that culminate with a boss battle. Players will travel to each of those locations in a predefined order, clear them, and eventually return looking for either mandatory items that are hidden in locations that could not have been reached originally or additional assets such as heart containers, collectibles that are part of sidequests, or keys that unlock the doors of an art gallery.

It is a setup that, in its heart, is not all that different from what the game’s three prequels had offered; however, the delicate, yet critical, difference lies in how the stages are not built like branching Metroid maps anymore, but as linear levels that would have been right at home in any other platformer. Truth be told, Shantae’s move towards an action-platforming ground is successful: the game is fun to play through; the stages are varied (as they include a trip through a mermaid factory, a magic carpet race, a thrilling escape from a giant worm in the ruins of a tower, and much more); and the whole adventure is sprinkled with Shantae’s signature self-aware humor and many of the iconic sidecharacters players have grown to love.

Yet, the new format clearly holds the game back. Backtracking through a sequence of action-based levels is not as fun and natural as doing it through a structure that resembles a maze, even considering the fact they are slightly changed after being cleared and how Shantae can quickly wrap between the stages that compose a world. More gravely, though, is the fact such configuration makes the incredible eight transformations borderline insignificant. Instead of being the main stars of the show, their use is merely punctual, because the abundance of action-platforming levels and the absence of dungeons do not create enough opportunities for their use. One can, for instance, clear the game without ever using the spider transformation and its main skill, which is disappointing to say the least.

If it were a game from a brand new franchise Shantae: Half-Genie Hero could be easily called great. It is not overly lengthy, clocking in at about eight hours if players go for full completion, but it has a satisfying duration nevertheless; it is beautiful to look at; it packs a solid soundtrack; and it has charm, humor, and level-design prowess. However, as the fourth installment in a series that has always excelled in the way it borrowed elements from Metroid and Zelda, and stuck them in the shoes of a platformer, it ends up falling short of that status. Newcomers are far more likely to thoroughly enjoy it than longtime fans, for while the former will see it as a truly delightful action-platformer with some notable quirks, the latter are bound to view it as not just a missed opportunity, but a step back, one that apparently fails to materialize half of what made its prequels so beloved in the first place.