Mario Party 2 is a game that gives players way more tools to mess with their dearest friends than its predecessor did, something that will inevitably work, at some point, both for and against all players regardless of their level of expertise

Given the original Mario Party was, for the gaming world, one remarkable first, the primary instance in which a video game was capable to capture the joy of board games; its sequel, released one year later, had it easy. Mario Party 2 did not have to reinvent the wheel: all it had to do was pick up the formula forged by its predecessor and build upon it, implementing ideas that were originally left on the cutting floor due to a lack of time and resources, and coming up with ways to improve the partying experience based on external feedback. And that is what it did, for Mario Party 2 preserves its prequel’s uncanny ability to gather gamers of different levels of experience around a console while making the franchise’s first installment seem like bare bones in comparison. More than an improvement over what came before it, Mario Party 2 marked the first appearance of many great features that would become staples in the series, and for that reason it easily ranks as one of its finest outings.

When it comes to the ultimate goal of Mario’s line of partying games, Mario Party 2 does not alter it one tiny bit. This is still a game in which players must, during a configurable number of turns, roll dice, move around the board, and collect coins in order to buy the coveted stars, which will determine the winner of the match. Likewise, the end of each turn sees gamers facing one another in addictive and simple mini-games of various formats (free-for-all; 2 vs. 2; and 3 vs. 1) that will reward victors with ten coins. It is easy to explain, simple to understand, and engaging enough to keep aficionados and casual players alike glued to the chairs for the one hour the shortest board battles take to reach their end.

The magic of Mario Party 2 is how it adorns that experience with elements that, in general, have two positive effects: the creation of strategic layers that the original title did not present; and the increase of the importance given to reasoning and skill, with the luck factor becoming much less prominent than it was in Mario Party, where chance reigned supreme. However, Mario Party 2 is able to do that without sacrificing the franchise’s accessibility and balance, as not only can inexperienced players grasp its ideas quite fast, but they can also feel like they have a shot at beating their more veteran peers after spending a few minutes with the game. 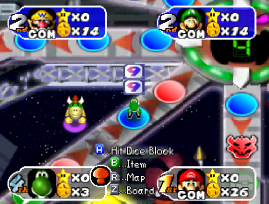 Mario Party 2’s most noteworthy addition is certainly characters’ ability to buy and use items on the board. Either found in stores (which are placed in fixed positions around the levels) or acquired through item mini-games (which are one-player affairs triggered whenever a character lands on an item space), items have varied helpful effects. Regular mushrooms allow gamers to roll two dice during the same turn; skeleton keys open doors that lock the entrance to specific areas of the board; magic lamps take its users straight to the space where the star is currently being sold; warp blocks randomly let characters swap positions with one of their rivals; and more.

Items are a great addition because besides giving players another asset on which they can spend their hard-earned gold, they – given their price – serve as a competitive advantage to players who win many mini-games and have, therefore, plenty of cash at their disposal. Moreover, deciding which item to purchase or to aim for when playing an item mini-game, and figuring out the best time to use it adds a good deal of tension to matches, as – for example – players approaching a star will tremble in fear one of their foes will activate their magic lamp and swoop in to take it away; and those with much to lose – such as an absurd amount of coins or stars – will certainly worry when they see someone acquire a Boo bell, which lets its user summon the ghostly figure so that it can rob someone’s goods.

When the potentially devastating effects of items are taken into account and summed with the residual luck factor from Mario Party that still stands – as tragic and somewhat random events around the boards still happen, and Bowser and chance time spaces still exist to disturb the peace of mind of anyone sitting on a comfortable lead – Mario Party 2 becomes a big bomb that is always on the verge of exploding. Although it gives skilled players more tools with which they can gain an edge, it also has the capacity of producing great swings within a few rolls of the dice.

Those swings get even bigger when one considers the addition of two new kinds of mini-games: battle and duel. The former kind takes place whenever a character lands on a battle space (designated by a lightning bolt) and has the form of specific free-for-all mini-games in which competitors fight for a jackpot that consists of coins taken from players themselves, with first place getting 70% of the lot and second place taking home the rest of the pile. The latter kind is a board-specific mini-game, which happens either when someone uses a dueling glove or when two characters happen to land on the same space; duel mini-games can have especially high stakes as it is up to the player who initiated the duel to determine how many coins will be put into the jackpot, and the only limitation regarding that reward is that both players have that amount of coins to bet.

The inclusion of battle, item, and duel mini-games – and of the usage of items themselves – makes Mario Party 2 much more eventful, thrilling, and action-packed than its predecessor. At the same time, even if most of those mini-games favor skill over luck, a few battle and item mini-games – and one specific duel from one of the boards – leave the door slightly open for fate to come in and determine the outcome of the tightest matches, something that will leave those who were infuriated with the original’s randomness pretty dissatisfied, once more, with what the game has to offer.

That eventfulness and those tight windows through which aleatory elements can sneak in are also present on the boards themselves. The levels are better designed and more complex than those of Mario Party, and although there is little to nothing that is really original about their themes, it comes as a pleasant surprise that characters dress in costumes that match the scenario of the boards. For that reason, when traveling to Western Land, Mario and company will roam the board as cowboys; while their time on Horror Land will be spent inside a wizard’s outfit.

The boards’ greatest improvement, though, is that in addition to being far more visually appealing than their Mario Party counterparts, the events that happen on them are also far more entertaining. Horror Land, for example, has a day and night cycle that alters how some locations around the level work; Western Land features both a milk bar, at which players can splurge to invite all of their friends for a round as an excuse to draw them away from the star, and a train that can be boarded to reach the following station while running over everyone that is standing on the way; and Space Land includes police patrols and a deadly laser, activated when a countdown reaches zero, that will make anyone it hits lose all of their coins.

In other words, Mario Party 2 is a game that gives players way more tools to mess with their dearest friends than its predecessor did, something that will inevitably work, at some point, both for and against all players regardless of their level of expertise, as even though experienced gamers will have more control over their fate here, they will still be quite vulnerable to the turns destiny loves to take. And that factor will make its skirmishes far more fun, hilarious, exhilarating, and infuriating; making Mario Party 2 quite easy to recommend to anyone who has neither a weak heart nor a short temper.

Even though it carries all of its predecessor’s shortcomings (namely, a single-player experience that is awfully dull; a bland soundtrack; unimpressive graphics; and an always looming luck factor), Mario Party 2 is a far better game due to all the features it adds and a collection of mini-games that is vaster and more solid. Mario Party will always stand as the franchise’s true ground zero, but thanks to all elements it introduces – pieces that are still key components of the series many years later – Mario Party 2’s fuller overall experience feels like the true beginning of a lot of what was to come.