Instead of being filed along franchise detours that took characters out of their comfort zone only to reach spectacular and worthy results, Pikmin’s journey out of its original realm ends up being rather unimpressive

Taking iconic characters out of the comfort zone into which they were born is not a new strategy for Nintendo. Mario has experienced great success in that regard, be it through the acclaimed role-playing sagas in which he has starred or via the mad kart-racing he and his peers have conducted; similarly, his alter ego, Wario, reached comparable glory when abandoning his treasure-chasing platforming quests and opting to make money in a less physically demanding way when he opened his own gaming company. In fact, nowhere is the widespread power of that approach more blatant than in the Super Smash Bros. franchise, in which virtually all members of the company’s stellar cast were removed from the coziness of their original genres and put on suspended platforms in order to blast one another out of the ring by using their own signature moves.

This branching out works in numerous levels. The major series are able to not only gain constant releases but also reach a wider audience through the different facets of those universes that are exposed in the distinct games. Their fans, meanwhile, can sit back in satisfaction, as they receive multiple chances to be in touch with the characters they love so deeply. Finally, Nintendo gets the opportunity to give a shiny and easy-to-market coat of paint to weird concepts and new gameplay ideas that would have otherwise run a serious risk of going unnoticed by the market. Sadly, though, as titles such as Star Fox Adventures (in which one member of the winged titular squadron is put on the ground) and Donkey Konga (Nintendo’s bongo-based response to Guitar Hero) prove, not all trips properties take out of their comfort zone are met with the same accolades.

And that is where Hey Pikmin comes in. Through the first three installments of its main series, the franchise showed how tiny humanoids would crash-land onto a planet and have to enlist the native and always helpful Pikmin on a quest to either recover the necessary items to get their ship back in orbit and on its way to their destination, or to acquire resources that are much needed back home (in the case of Pikmin 3). Those games excelled in a fine balance between the real-time strategy required to deploy and manage an army of Pikmin in fights against enormous creatures; the exploration that finding key items and more Pikmin demanded; and the puzzle-solving brought by neatly crafted natural scenarios. Hey Pikmin, however, shifts the focus of the experience to a certain degree. 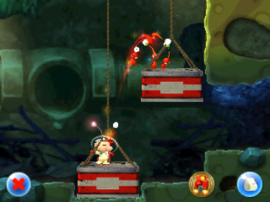 In a way, Hey Pikmin is not that different from the games that preceded it from a contextual standpoint. Captain Olimar – the saga’s recurring, humble, quiet, and secretly hilarious hero – is returning home from a mission when an imprecise warping operation causes him to, once more, fall to his doom on the surface of an unknown planet, a situation that seems to be ridiculously common in his life as a professional pilot and whose irony is not lost on him. Needing to locate enough fuel and an important missing piece of the ship to finally make his way back to Hocotate (where his wife, kids, and greedy boss await him), Olimar is lucky to discover yet another Pikmin colony that will gladly help him go through dangerous terrain, take down potentially mortal enemies, and collect the items he needs. The difference comes in the perspective in which the task is accomplished.

Hey Pikmin is a sidescrolling platformer, meaning that it trades the handful of explorable and wide open worlds of the original trilogy for a set of forty levels broken up into eight thematically cohesive worlds. Smartly taking advantage of the 3DS’ hardware, the game is controlled in a quite simple manner, as the control stick is used to move the character, and the other actions are reserved to the touch screen, for it features buttons that let Olimar use his whistle to call Pikmin towards him and employ a jetpack to float in the air for a little while and reach high places; and makes it possible to throw Pikmin by simply tapping a location on the screen.

Resembling what happens in Kirby titles, getting to the end of the stages of Hey Pikmin is not particularly challenging . Olimar and his Pikmin are a resistant bunch and save for a few bottomless pits that appear on occasion and for the pools of poison of the last world, there are not many instantly deadly traps along the way, which gives players plenty of room for error. Intelligently, though, Hey Pikmin is not about just progressing through worlds, as getting to the end of the line will only make Olimar overcome one of the two problems he has to solve: locating the missing piece of his ship. The remaining issue locking the captain to the ground, the fuel, can only be resolved via a careful exploration of the stages, for it is either found in plants and pieces of fruit scattered around them or in objects that were left by a long-dead human civilization and whose collection is not mandatory to clear the levels.

Truth be told, the fuel threshold that must be reached is, fortunately, not exceedingly high, meaning that even youngsters will be able to get to the end of the adventure and return to Hocotate. Still, the fact the game’s final goal is not intimately attached to the clearing of the levels brings a lovable quality that defined the saga’s previous entries to the platforming genre: the freedom of being able to only do and explore what one sees as necessary. And indeed that is perhaps Hey Pikmin’s strongest point, as it uses a feature that was found in its original gameplay style in a setting that is usually quite stiff when it comes to what needs to be achieved.

The game is, unfortunately, held back by shortcomings, both big and small, that stop it from achieving the levels of quality that are to be expected from games that are stamped with the seal of Nintendo’s most popular franchises. Firstly, there are the punctual issues, including Pikmin occasionally getting inexplicably stuck in places that are easy to navigate or not answering Olimar’s whistle, which makes the optional task of clearing each of the levels without losing any Pikmin a nightmarish ordeal; the general lack of challenge found in the bosses that mark the end of each world, which contrasts with their smart design; the frame-rate drops that occur when there is too much action on screen, a disappointing problem since the game’s natural environments and character models look so spectacular; the exaggeration of cutscenes that take place mid-stage that show Pikmin in cute situations, which would have been an excellent little detail if they did not occur so frequently; and the absence of mid-level checkpoints, which causes falls into pits or lakes of poison to send Olimar all the way back to the beginning of the level.

The biggest shadow that hovers over the game, though, is how – not too differently from what had happened in Yoshi’s New Island – Arzest is unable to create awe-inspiring levels. The transplant of the Pikmin concept to the bones of a platformer is not a lost cause, as it could have indeed opened some great doors in terms of game design; as it is portrayed in Hey Pikmin, however, it is certainly not as appealing as it could have been. That is not to say the game is devoid of great moments, as the different characteristics of the distinct Pikmin species give birth to nice gameplay variations, as red Pikmin get to deal with fire; blue creatures tackle watery scenarios; the slim yellow kind serve both as a current for electricity and a means to reach higher places; the brute stone purple beings do away with rock-solid obstacles and enemies; and the tiny pink fliers carry Olimar through shafts. 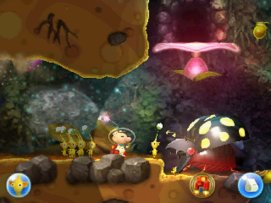 The problem is that genuine cleverness and ingenuity are mostly missing in action, which makes the chart that marks the excitement of playing Hey Pikmin be a little bit on the flat side. It never quite drops into extreme dullness, but it also never rises above pedestrian. The traditional bridge-building ability of the Pikmin, for example, as they carry pieces of the structure to the assembling point in order to put it back together, is never used in a way that forces Olimar to actively seek out the missing pieces and uncover new parts of the scenario, as it occurred so often in original trilogy. Instead, pieces of the bridges are always located right beside them, making constructing them a matter of throwing Pikmin towards the pieces and watching as they work. Likewise, signature franchise puzzles that involve the coordination of various types of Pikmin to perform an action are mostly absent, as, in place of that, the game focuses on series of punctual obstacles that require Pikmin of different colors.

Because of all of that, Hey Pikmin comes off as a big missed opportunity, with the only point in which it achieves thorough success being in its writing, as it is an utter delight to read Captain Olimar’s honest and funny contemplations about what in the world the human objects he comes across must have been used for, which does wonders towards building his character and the universe he inhabits. Other than that, Hey Pikmin is mundane, falling short of delivering the creativity and inventiveness the public expects out of such an important property that carries the Nintendo brand of charm and cleverness. Therefore, instead of being filed along franchise detours that took characters out of their comfort zone only to reach spectacular and worthy results, Pikmin’s journey out of the confines of the real-time strategy realm its exploratory nature thrived on ends up being rather unimpressive. Captain Olimar and the adorable Pikmin that guide him through numerous devastating dangers deserved far more, and – hopefully – they will get another shot at the genre in the future; crash-landings have never stopped them from coming out on top, after all.