Its good heart, concept, and ambition are precariously held together by uninspired gameplay

Sequels always carry some degree of intrigue. If they are the continuation of a memorable title, they present the remarkable challenge of not only achieving, but trying to find a way to surpass the game that preceded them. However, if they come on the heels of an underwhelming, or even bad, gaming experience, they provide an unusual positive situation. After all, with the reading of the many reviews across the press, and the listening to fans’ complaints and suggestions, developers are faced with a clearly drawn path right in front of their eyes, and, if they follow the suggested recipe, the outcome will most likely be a clear improvement over what came before.

The original Epic Mickey had to live up to high hopes, and rightfully so, since it was the work of the devotion of one of the greatest modern game designers, and featured Mickey Mouse and other Disney icons trying to reclaim the high level of praise directed towards Disney platformers of the 90s. The game, however, ended up suffering from a few punctual mistakes that stopped all of its pieces from coming together nicely.

Epic Mickey 2, then, sets out to fix those issues and finally deliver the game players have been waiting for, and, initially, it starts off quite nicely. If Mickey and Oswald were, during the biggest part of the original’s running time, clear antagonists, in Epic Mickey 2 the mouse and the rabbit join forces to find out the truth about mysterious earthquakes that have been plaguing and destroying the recently recovered Wasteland.

Watching Mickey and Oswald interact with each other, and with other famous Disney figures, on the game’s very well-done stylish cutscenes is quite a sight, and the fact that Junction Point decided to turn the game into an occasional musical fits right in with the overall goofy humor the game successfully conveys. Even if the game’s plot is less inspired and more predictable than the solid tale told in the original, it is still a very good story considering the average standard of the platforming genre.

The fact that Oswald and Mickey are now working as a team obviously expands the gameplay possibilities, as the two of them need to frequently combine their powers in order to surpass the many platforming and combat obstacles. While Mickey uses his paint and thinner to either restore or destroy the world around him, Oswald carries a remote controller with which he can unleash electrical attacks or hack devices.

The stages are packed with opportunities for both of them to work together, whether it is by using Oswald as a tool to power Mickey’s jump or activating switches simultaneously. In fact, cooperation is so vital that even the sidescrolling stages that are based on Mickey’s old cartoons and that serve as a link between major locations have been designed to give both players the opportunity to simultaneously traverse the same stage following different routes, something that often produces some quite amusing results.

However, the whole concept of a team is sadly undermined by both bad AI and questionable design choices when it comes to combat. Oswald is not as smart as a partner should be, and while he does not get stuck on any objects, Mickey will frequently have to wait for him to arrive at his current location if the two of them are to activate an object at the same time to proceed.

Such a shortcoming can be forgiven by some, but if there is one thing that cannot, by any chance, fail to cause overwhelming frustration, is how ridiculously annoying combat is. Most of the enemies in the game are big armored beasts, meaning that Mickey and his brush are not able to beat them by himself. Therefore, when adventuring alone, players must wait for Oswald to attack the bad guys before Mickey can go in and do the real damage. Unfortunately, Oswald occasionally misses his chances to attack, which turns simple battles against regular minions into ordeals that extend for too long.

While Epic Mickey suffered from poor camera implementation, Epic Mickey 2 is clearly free from that issue, which means that full-blown glorious platforming can be enjoyed without any technical issues. The problem is that Epic Mickey 2 never quite succeeds in producing great stages or environments, and its level design is clearly worse than that of its predecessor, failing to put together any truly engaging moments, with a few clear exceptions. 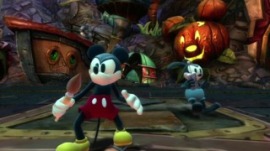 It is hard to point out what exactly it is that stops Epic Mickey 2 from featuring locations as good as those on the original, but a good guess would be the game’s setting. In Epic Mickey players had to explore a dark sinister copy of Disneyland that had been torn apart by some bizarre corruption of ink, but in Epic Mickey 2 a huge part of the gloom and mystery is gone, replacing the artistic darkness that put a great twist on familiar Disney-happy environments with environments that have been ravaged by earthquakes.

If Epic Mickey looked like a steampunk Disney painting, The Power of Two features levels that almost invariably look like a cluttered mess of Disney references and memorabilia, being closer to an unorganized dirty bedroom than something that is tarnished, but, at the same time, intriguing to look at.

Sad to say, aside from story, overall good use of Disney licenses, fun little sidescrolling levels, and solid controls, the only elements left to admire in The Power of Two are concept and ambition. And, once again, but this time around in a much more pronounced way, Mickey stars in a game that does not live up to half of what it aims for.

When looking at the great number of sidequests, something that is very unusual for a platformer, it is plain to see that Junction Point was determined to build something big and significant. The goals of those sidequests range from taking pictures of locations and hidden Mickeys – regular objects in the scenario that are arranged to form the silhouette of Mickey’s head – to collecting treasures at certain locations, and most of them hold good value, whether it is by providing players with significant rewards either in the form of a nice reference that will make Disney fans very excited, or a valuable collectible; or by pushing gamers to find some of the secrets hidden in the game’s environments. However, given they are built on top of a gameplay component that is not exactly bright and engaging, they never gain traction.

Even if the game’s artistic direction pales in comparison to what appeared in the last game, The Power of Two is a title with nice visuals, especially when it comes to character models and animations. And its visuals even come to the aid of gameplay every once in a while, because – much like in the original title – using the paint to slowly reconstruct the pieces of the scenario that have been damaged by the earthquakes brings some degree of reward. In addition, and rightfully living up to the very high standards established by Disney’s cartoons in the musical department, it showcases a few great tunes that are either newly composed or reinterpretations of classic Disney songs that are imprinted on the minds of anyone who has watched one of the company’s animations.

When it is all said and done, though, The Power of Two does what not a whole lot of people expected it to do: it fails to surpass its irregular predecessor and, in a bad turn of events, winds up being considerably worse. Gone is the darkness that made Epic Mickey so remarkable, and in come messy environments whose elements are not cleverly used to produce noteworthy levels. 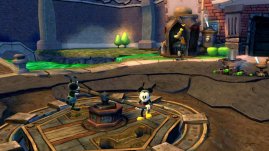 Disney fans might get some moments of rush either by seeing their favorite characters interacting with each other in the development of a nice story, or by sinking their teeth into the Disney collectibles available, which include old Silly Symphonies or Mickey Mouse cartoons that become available to be watched. However, those who have a lesser degree of admiration for the company will find a game that is uninspired and that feels rushed due to the fact it falls so far away from its predecessor. The eight hours of adventure are, sadly, neither intense nor unforgettable. They are, actually, an awfully sad sight, because as far as being a gamer goes, there is nothing sadder than watching a title with good heart, intentions and ambitions fall flat on its face.

8 thoughts on “Epic Mickey 2: The Power Of Two”