By contrasting two opposing gameplay styles, Revelations brings out the very best and the worst in the series 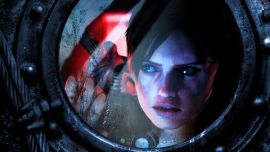 During the course of its life, the Resident Evil series has gone through some polarizing changes that stranded some of its most conservative fans, but that opened up the gates for a large group of outsiders. By doing away with traditional survival horror and stitching up some of its best elements with the action-packed formula that the best-selling shooters of the modern gaming era sport, it could be said that Resident Evil was successful in maintaining a firm grip on its position as one of the gaming market’s leading franchises; staying afloat by giving in to trends instead of running the risk of fading away alongside the genre it was born into.

Even though infected human beings who turn into some sort of brainless horde of disgusting creatures were still there, the series ended up losing a big part of its personality when survival was replaced by straight shooting. Given that scenario, every brand new game of the series comes along with piles of questions, doubts and hopes regarding whether the franchise will further immerse itself in action, moving farther away from the elements that won the hearts of many people back in its early days; or if Capcom will realize the series’ potential for standing out among the crowd of shooters, and go back to exploring its roots.

Resident Evil: Revelations does not come in looking to find a middle ground that could potentially please both of its conflicting audiences. There is no simultaneous blend between frantic action and overwhelming creepiness, those two elements are like oil and water. However, the game is still able to – within the same cartridge – bring both mindless action and, what is perhaps, the most terrifying and tense location to appear in a Resident Evil game since the Spencer Mansion. 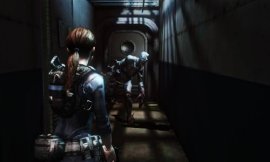 Initially, this blatant split in gameplay perspectives could be seen as a pleasant attempt to create a game that offers players a good range of variety, never being stuck in the same format for too long, and it is hard to deny that the title occasionally reaches a nice pace in this alternation; however, it is equally tough not to conclude that, sometimes Resident Evil: Revelations is able to, within the interval of a couple dozen minutes, expose the very best, and the very worst of the series. It is a game that, therefore, is far from being solid all the way through, but that, in the sum of its parts, winds up being great rather than average.

This drastic division of gameplay scenarios is supported by the way in which the game’s story is structured. Chris Redfield and Jessica Sherawat go missing during an investigative mission on a terrorist organization, and the location of their disappearance is believed to be the SS Queen Zenobia, an abandoned ship adrift in the middle of the Mediterranean Sea. That is when Clive O’Brian, the director of the Bioterrorism Security Assessment Alliance, sends both Jill Valentine and Parker Luciani after the two of them.

The terrorist organization that is under investigation happens to be Veltro, which one year before the game’s events executed a biological attack on the model floating city of Terragrigia in an attempt to oppose the city’s newly implemented solar energy usage. By setting up two events with no apparent direct connection other than involving the same terrorist group – the disappearance of Chris and Jessica, and the destruction of Terragrigia – the game opens up two different fronts, hence allowing two different types of gameplay to be seamlessly implemented. One front is inside the ship and the other one takes place away from it, the former being used for the game’s survival horror segments and the latter focusing on shooting.

The game is divided into thirteen different chapters, each being composed of some exploration of the ship, and either some investigation or flashback related to the story taking place in the outside world. The ship is downright terrifying, and everything about its atmosphere is more than suiting for a Resident Evil game. It has its share of dark corridors, abandoned rooms, and maintenance areas that are nicely designed; all of them – of course – accompanied by very well-calculated sound effects that add a new layer of creepiness to the exploration.

As a nice contrast, and a pleasant variation from the game’s predominant dark visuals, the ship, as any fancy transatlantic vessel, also houses some impressive wide-open spaces that clearly exhibit all the financial power and charm that once walked its halls. Going through the ship is tense and suffocating, something that happens to be quite an achievement considering the portable nature of Revelation’s 3DS version. Despite being fragmented into chapters, it is possible to backtrack through the ship’s interior, and its map is so well-structured that having more than two options on how to reach a new area is not uncommon.

Sadly, if the first half of most chapters showcases a prime example of outstanding Resident Evil gameplay, that cannot be said about their second part. Once the story’s focus is taken to the outside world, Revelations brings out the main issue that has been plaguing modern games of the series: their lame attempt to provide action when it obviously fares much better when the spotlight is set on horror.

Due to either being flashbacks or because of their investigative nature, those sections provide some very good plot development that is tied up pretty nicely to what happens on the ship, but when their gameplay is analyzed under a critical light, it is possible to notice that it consists of linear progression through bland scenarios and mindless shooting with plenty of ammo at the characters’ disposal. In other words, it is the antonymous of what Resident Evil games know how to do well, and as a consequence those portions feel like occasional breaks from the meat of the game, and players will often feel those intervals will take just too long.

Despite the system’s lack of a second analog stick, the controls work surprisingly well. The camera will be placed right above the character’s shoulder, a position that bodes well for both of the game’s distinct facets, allowing for tense moments when players cannot tell what is around the corner, and provide a good exciting view of the more fast-paced moments. The game still retains the same implementation for the movement of the characters as other Resident Evil games, as they behave pretty much like little tanks, but it is pleasing to discover that it has finally become possible to move Jill Valentine and the others while they are aiming at incoming infected enemies. The touch screen is wisely used, as it serves as a way for players to navigate through their weaponry, and manage it without having to stop the game, being able to switch between any weapons or grenades they are carrying simply by tapping them on the lower screen.

Speaking of weapons, Jill will have quite an arsenal at her disposal. However, in order to find all of them, players will have to put a great level of effort into the exploration of the ship, as some of the devices are cleverly hidden away. Besides weapons, the game’s good difficulty level makes it important for players to locate weapon upgrades that are, likewise, scattered around the vessel. Those upgrades can be managed at certain locations and each of the three weapons that Jill can carry with her at any time in the game can be equipped with a certain number of varied upgrades that go from rapid firing to bullets with nice side effects, which give the game a nice level of customization. 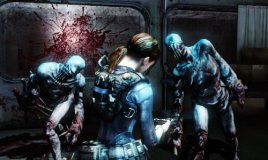 If weapons are important to Resident Evil, ammo is even more vital to determine the quality of the game, and Revelations hits the nail on the head by (during the ship segments) handing players enough bullets to defeat all enemies that show up, but not in amounts that make them comfortable to shoot away wildly, fearlessly laughing in the face of ammo conservation. Sadly, enemies do not come in considerable varieties, nor do they have very inspired designs, as most of them can be defeated in pretty much the same ways.

Resident Evil: Revelations’ value is not restricted to its single-player mode. The game comes packed with one of the finest portable multiplayer experiences. By either going online or finding a local friend to play with it is possible to replay through different parts of the ship in a cooperative manner, killing bigger groups of enemies and solving the same puzzles that had to be tackled during the single-player adventure. Depending on how players fare, they will earn a certain amount of points that can be exchanged for new weapons and equipment to further power-up characters and make it possible to clear the same locations players have already been through, but in much harder difficulties. The replay value here borders on endless, and it is not far-fetched to say that some gamers will spend more time playing through the game online than finishing the game’s twelve-hour campaign.

Besides the multiplayer, the other area of the game that deserves nothing but a resounding round of applause is its visual department. Even though it came out early in the Nintendo 3DS’s lifespan, Revelations is one of the system’s best-looking games; a remarkable technical achievement all the way through. The title does suffer from some eventual slowdowns, especially in elevators – when the game is loading new areas – but everything about it, even the tiniest textures, is extremely smooth and worthy of praise. 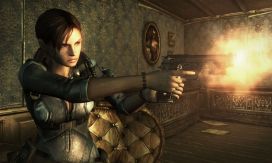 The character models display outstanding fluidity in their movements, and the environments are stellar, especially when dim lights are posed against mostly dark backgrounds. Resident Evil heavily relies on atmosphere in order to succeed, and by being able to process such incredible visuals with the hardware at hand, Capcom makes sure – from the get go – that reaching a good immersion level will be a breeze. The goal is further achieved by the jaw-dropping cutscenes and mostly great voice acting, which is slightly marred because the game features a few lines whose writing wanders through cringe-worthy territory.

Revelations is ridiculously easy to recommend. Even though almost half of its core campaign is wasted on not-so-compelling shooting sections, the survival segments are a showcase of the series at its very peak. At times, the storyline might get a little bit too convoluted due to the web of happenings surrounding it, but the plot – and the way it is slowly developed – keeps the experience interesting all the way through, going beyond making players wonder what is around the next corner, and also making them look forward to discovering the truth behind what is going on in the ship.

Revelations is a great package of both single and multiplayer experiences that is extremely worth it. If, in some aspects, it is clear in showing what the series has been doing wrong; it is also able to teach everyone who plays it that, when it is all said and done, a fantastic setting goes a long way into supporting a great thriller. And, most importantly, it shows fans that somewhere within Capcom, there are still people who know what a Resident Evil game is all about.