Its overwhelming tension wears out as the game progresses, but when it thrills, it does so in remarkable fashion

Harry Mason, a somewhat unsuccessful writer, drives through a snowy night when, suddenly, he loses control, skids off the road, and hits the metal fence of an old warehouse. A few moments later, he wakes up and struggles out of the car, only to notice that his daughter has gone missing. Still a little bit shaken up by the accident, he looks everywhere in the vicinity, but cannot find her. Finally, he decides to pick up the flashlight he keeps in his car and wander into the cold night in a desperate search for the seven-year-old girl. With the dim light as his only company, he ventures into Silent Hill, opening doors to dark rooms, walking around the town’s deserted streets, and interacting with a few strangers he encounters on his way, while discovering secrets and memories that the place keeps of its vanished inhabitants.

That is the haunting premise of Silent Hill: Shattered Memories, and, truth be told, it could not have been better suited for the Nintendo Wii. The very well-constructed environments, as well as the darkness and numerous objects that fill them up are extremely immersive. And, helped by the game’s excellent exploration pacing, it is a very tense experience from the get go.

Harry’s flashlight, which is controlled via the Wiimote’s always effective and intuitive pointer, is not only one of the finest and most precise uses of the controller in the system’s library, but it is also hauntingly suitable for the game. The fact that most scenarios are very detailed and blindingly dark means that objects and set pieces are slowly revealed to players as the flashlight aims at a certain spot, turning, thereby, the process of journeying into schools, stores, houses and other locations into a very thrilling experience, because it is awfully hard to know exactly what lies around each corner.

Silent Hill: Shattered Memories reaches onto a whole extra level of immersion by allowing Mason to interact with a big number of objects around him. In order to open some doors, for example, players will have to use the Wiimote’s pointer to remove the locks; on another occasion, to find a key hidden inside a soda can, gamers will be required to twist their arm as if they were turning the can upside down. These moments are relatively frequent, and they are bound to be rather divisive: while the controls required for those movements are all responsive, players who are not fans of actions that require motion will be frustrated there is no other way around them (as brief as these interactions may be); on the other hand, people who embrace that style of gaming will feel like a town that is already rather involving will gain a few touches of allure. 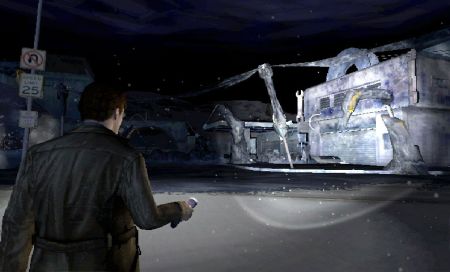 Speaking of the titular town of Silent Hill, in Shattered Memories it becomes a character of its own. As Harry explores it, he will be able to occasionally detect creepy static sounds that indicate the proximity of objects that have high emotional value attached to them. Once those objects are properly identified, Harry will – through his phone – receive either text or voice messages that retell stories somehow related to these items. It is a welcome extra layer of detail, and it is also something that gives more meaning and reward to a well-planned exploration of the city’s environments. It is as if, in addition to the game’s core tale, the city itself was telling gamers stories that serve as nice companions to the main affair.

Shattered Memories is not all about walking through Silent Hill, though. Every once in a while the gameplay will be halted and players will interact with a psychiatrist that will ask generic questions about life, death, high school, marriage, relationships and other important matters. Those seemingly innocent tests will have a big impact on how the game will play out, changing the characters Harry will interact with during the adventure, the development of the story, the ending itself, and even the design of the bizarre-looking creatures that will eventually chase after him. This satisfying amount of possibilities adds some extra replay value to the game, which is very welcome news, since the main story is a little bit too short, clocking in at about six hours.

The creatures that will haunt Harry’s journey will provide downright thrilling chase sequences, where players will have to navigate through altered scenarios while being hunted down by shrieking beings that will come out of unexpected places and throw themselves onto the character’s body. Since Harry packs no weapons, those moments are very nerve-wracking and also physically intense, since that, in order to get rid of the creatures, harsh throwing motions need to be performed with the Wiimote.

The downside of these chases is how frustrating they can become at times. To be safe from the beings, Harry needs to reach a specific location. However, given the map can only be accessed through the character’s cell phone – which in turn can only be brought out if Harry slows down – checking the map will most certainly mean the creatures will find him and possibly bring him down. As a consequence, the chases sometimes deteriorate into a desperate and aimless search for the safe spot, a reality that gets frustrating after a few failed attempts have been made to overcome a chase sequence.

Aside from that issue, and its relative short run, Shattered Memories has one – far more aggravating – flaw, and that is its predictability. After a short while, the game’s structure will become clear to players, and the moment when enemies show up, and threat actually exists, will be obvious, meaning that a considerable part of the exploration (that is, everything that comes after players have figured out how monsters only appear in very specific occasions) will be done without any feeling of threat.

For a game that uses darkness, a flashlight, and detailed environments on its behalf, that shortcoming works heavily against the software’s nature. Thrillers often thrive on producing frights when they are not expected, but as time passes, Shattered Memories will only try to terrify its players when they expect to be terrified, and that is not a fertile terrain for scares.

Yet, overall, Shattered Memories is more than worthy of one’s time. As far as frightening games go, it might be one of the scariest titles of the Wii’s library, in spite of how a few key flaws stand on its way to sheer greatness. Even if it is not haunting all the way through, Shattered Memories remains as one of the system’s best uses of the Wiimote (including an incredible sound design move that uses the Wiimote speaker as a disturbingly realistic cell phone sound outlet), some of the greatest realistic scenarios to ever show up on a Wii game, and a handful of clever puzzles that will require logical thinking and deep analysis of the environment. Its overwhelming tension wears out as the game progresses, but when it thrills, it does so in remarkable fashion.