In a way, designing a game, like building pretty much anything from the ground up, comes down to doing a lot of little things right – or wrong – and then finding a way to integrate them nicely – or poorly – to form a single glorious – or disastrous – package. That is why, more often than not, the difference between a great game and a poor one is in the tiny details that in conjunction rescue the game from the bargain bin and lift it straight into the list of critically acclaimed best-sellers.

No More Heroes 2 is a classic example of that concept. Though its bare bones reveal a game that could have ended up being labeled as generic or monotonous, the items and decorations added to that structure end up catapulting the game into much higher grounds. Suda 51 found a way to craft one of the most outrageous, dirty, provoking games to ever make its way to a home console and, ironically, it landed on the family-friendly Wii.

At its core, No More Heroes 2 is annoyingly straightforward. Armed with a laser sword, the starring character seems to have an ability to dispose of enemies a little bit too easily. Hence, the game is nothing but a 3-D version of the old-school beat ’em up games that populated arcades in the early 90s. Players walk into a room, a large horde of foes comes, players beat them senseless, or headless, with their sword while producing very gory results (including water fountain-like torrents of blood coming out of decapitated bodies) and then they are either attacked by more enemies or receive the green light to move onto the next room to face the yet another group of bad guys. Sure, the main character has a few varied moves available to be used during battle, but they are not enough to break the game’s mold at any times, meaning that No More Heroes 2 could be a game blindly walking into a dark pit of rinse-and-repeat gameplay.

However, long before the game falls to its doom, it is readily rescued by the many layers of personality added on top of the formula. Travis Touchdown, a former assassin and inhabitant of Santa Destroy, suddenly sees himself in a situation where he must go back to his former bloody life when one of his closest friends is murdered by the top-ranked assassin in the city. Since confrontation with the killer, and sweet revenge, can only be achieved by climbing up the ranks, Travis rejoins the assassin guild with a strong urge to fight and slice his way to the top of the list. However, his way up the ranks will demand a lot of work as, since the guild has become increasingly popular and Travis is re-entering it from the bottom: he ranks in the meager 99th spot.

Although he does not fight 98 assassins, Travis’ journey up the ranks will put him in confrontation with some absolutely ridiculous – in the good sense of the word, of course – figures. The game’s many stages take place in different locations across town, such as a stadium, a university, and others, and in each of these locations Travis will come across assassins that not only fit the theme of the place perfectly, but also often work as exaggerated caricatures of the people that would inhabit those places. 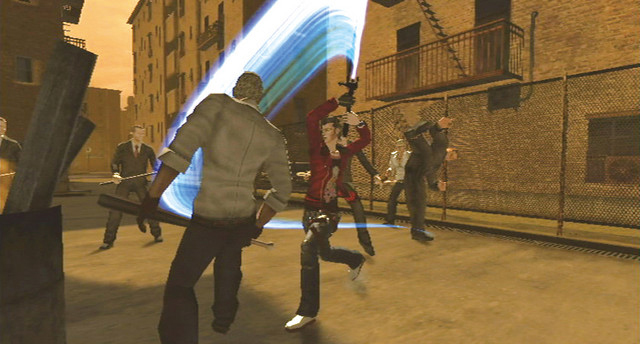 What is truly great about No More Heroes 2 is that it is impossible to know what to expect next, and due to that the game constantly keeps players on their toes and wondering what maddening insanity they will find at the next location they have to visit. There is only one certainty; whatever there is to be found, it will most likely be either offensive to a part of the population or simply disgusting.

The game’s personality obviously extends beyond the assassins. It overflows Santa Destroy and contaminates everything Travis does or says, and all the people he interacts with. Santa Destroy reveals itself, either through the development of its story or through the minor side-encounters, to be a true concrete jungle where people are selfish, reckless and have no regard whatsoever towards common sense or public opinion. Travis himself is the very extreme portrait of a geek that loves games, wrestling, and manga, and has politically incorrect thoughts of women as frequently as he slashes somebody’s throat open. He is a man that sits on the toilet in order to save the game, undertakes any kind of job in order to collect some money, applies foul language to every sentence, and only shows true affection towards his overweight cat.

Speaking of the jobs Travis takes, they are possibly one of the highlights of the game. No More Heroes 2 is a title filled with old-school gaming references, to the design of some of the game’s visual elements to the beeps that occasionally appear among its sound effects, and that 8-bit-gaming homage becomes full-blown in those jobs. Whether he is removing giant bugs from a house, cooking a steak to the requested point, making deliveries in his motorcycle, or collecting coconuts, gamers will be accompanying Travis on those activities through 8-bit mini-games divided into many levels.

Each of those activities could, without a drop of exaggeration, very well have been full-fledged NES titles given they are incredibly fun and addicting. There are about ten of those mini-games, including the ones Travis must perform in the local gym to increase his stamina and attack power, and even though money is not an extreme necessity in the game, at least on its easiest levels of difficulty, players will most likely be spending many hours – literally – performing those activities while they take a break from the constant killing.

Outside the 8-bit realm, the game’s visuals are perfectly suited for the world the software tries to convey. No More Heroes 2 features a highly-stylized cell-shaded art direction, giving characters the ability to broadcast their over-the-top emotions and ideas with great precision and allowing developers to take some rather extreme and ideal steps when it comes to the violence shown in battles. Most importantly, though, the visuals nicely go along with Travis’ love for HQs, making the whole of No More Heroes 2 feel like it lives inside a very bizarre nearly-apocalyptic comic-book setting where humans are about to destroy themselves due to sheer insanity.

No More Heroes 2, though, does have a good number of flaws that work against its many qualities. The game’s sound effects, more specifically the words uttered by characters during battle, are so limited that players will be hearing the same exact cries for mercy or help once every five seconds. Another considerable issue is the game’s camera, which often fails to show the best angle that the action demands, creating some rather frustrating situations. Finally, the repetitive nature of the battles could have been solved by bigger enemy variety, but that is not the case as even though the groups of enemies differ in their composition and number, they are usually formed by less than ten different sorts of enemies that can, pretty much, all be defeated in the same way.

Overall, No More Heroes 2 is a great title. It could have gone wrong in a number of ways, but through its sheer disregard for all things naturally human it manages to find many ways to succeed. The adventure lasts for about eight hours, discounting the time spent on the mini-games, and there are nice extras – such as a few challenging difficulty levels – that serve as good incentive for players to come back. More importantly, No More Heroes 2 shows that videogames are at their very best when they are set free from the constraints and rules that make our real world so dull and mundane. Travis Touchdown slices open the throat of those limitations and uses their gushing blood as his own demented version of the popular yellow brick road. And the path constructed by all the gore leads him to some rather entertaining places.