In spite of how well it balances its spectacular script and its solid gameplay, it is impossible not to walk away from Owlboy without feeling that its plot overpowers everything else about it

Otus, the lovable protagonist of Owlboy, does not have the makings of a traditional videogame hero. Born a mute to parents who mysteriously disappear not too long after his birth, he ends up being raised by Asio, the stern teacher of the village where he lives. As a shy, sensitive, and introspective child, Otus is also clumsy; due to that, and much to the frustration of his mentor and fellow villagers, the character often fails to execute the simplest of assignments.

He has a hard time learning how to fly; he faces trouble when trying to aid others during emergencies; and he struggles to follow his tutor’s orders. Consequently, despite his good intentions, Otus is, to various degrees, ostracized: Asio harshly scolds him every time he fumbles a task; a few of the local young owls bully him; and most of the other members of the community quietly, yet effectively, push him away, denying his attempts to help and occasionally letting out remarks about how he cannot get anything right. His sole consolation comes from the few true friends he has, who are able to put a smile on his usually gloomy face. 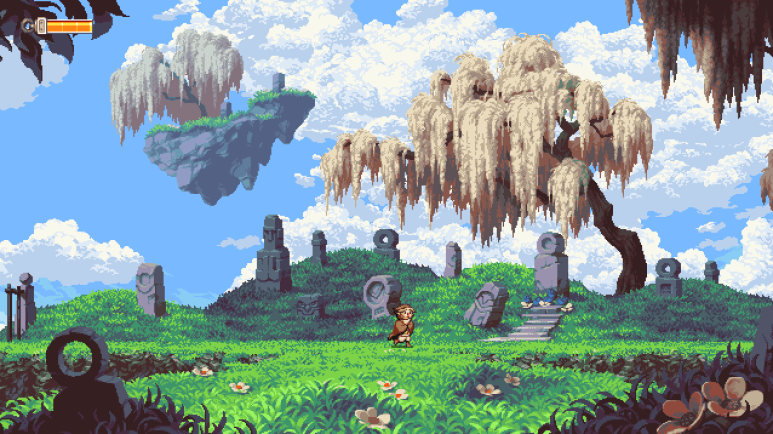 It is that positively unorthodox setup that is responsible for much of the greatness contained within Owlboy. Heroes who fail a couple of times before succeeding are not exactly new to videogames; after all, numerous are the titles that take failure as their starting point, depict an uphill climb, or include scripted battles that cannot be won. Owlboy, however, feels different, and that is because absolutely nobody expects Otus to achieve remarkable feats; when danger or difficulty step in, those who need assistance would rather tell him to stay home than accept his desire to lend a hand. As such, Otus is not thrown into an adventure because he is seen as the only hope remaining; he stumbles upon the quest of Owlboy for, regardless of what others tell him, he – sometimes through his own willpower, but mostly thanks to the support of his friends – believes he can do something about it and that, by doing so, he can change the perception people have of him.

True to that personal conflict, the road Otus takes throughout Owlboy is not exactly smooth. A gang of vicious pirates, led by the mighty Molstrom, come violently knocking on his village in search for one of the three owl relics, which grant their holder incredible powers. When that happens, Otus is – partially accidentally and partially due to his willingness to provide aid – sent on a grand journey.

True to the norm of most adventure games, that quest has him uncovering the past of a lost wise civilization and saving the world from total doom, and in this particular regard it could be argued that, even if it does not affect the overall enjoyment of the story, Owlboy could have used some extra clarification in relation to a few plot points. Far more important than that overarching lore, however, is the fact that Otus’ path is paved with failure. Frequently, the actions he takes and the acts he performs, although correctly planned and filled with a great purpose, do not bear the expected fruits and come to confirm the opinion most have of him. Nevertheless, hoping to atone for his mistakes and prove his worth, he plows through it all.

On his own, Otus cannot do much. He jumps, he flies, he runs, and he has a spin attack that breaks a few obstacles and stuns foes. It is fitting then, given how important his friends are in his life, that it is with their help that he overcomes the challenges he faces. As the adventure goes along, Otus forms three strong alliances, and it is by carrying these partners while in flight that he will find a way to complete his journey, and these bonds play a major role not just from a gameplay standpoint but also in plot and character development.

In the former category, each of Otus’ friends gives him extra abilities that are used in combat as well as in puzzle solving, including distinct projectiles, a lighter to activate fuses or illuminate dark places, and a spiderweb that allows Otus to quickly move towards walls and other objects. Meanwhile, in terms of script, it is quite heartwarming to see how the partnerships Otus builds are sometimes unlikely. Those who are able to see his good heart and believe in his capacity are, like him, outcasts. However, their origins are very unexpected (a factor that serves as a testament to the value of Owlboy’s central hero and makes his goodwill resonate even further) and the arches they follow until they come to be beside Otus are finely handled.

Given the weight of its plot and how it serves as guiding thread during the game’s eight-hour run (discounting a couple of optional collectibles), Owlboy is absolutely linear despite taking place inside a relatively open – albeit not too big – sidescrolling world. And even though it is a short quest built on a very simple framework, it is able to find a surprising amount of gameplay variety. When out in the open, players have a nice degree of freedom to fly around and explore the landscape as they look for a way to reach their next destination.

Meanwhile, when it moves on to more enclosed spaces, Owlboy mixes a nice range of influences up, providing a trio of dungeons inspired by The Legend of Zelda that have the expected amount of puzzles, backtracking, and nice bosses; a handful of segments that mix action and stealth; and even a brief portion when Otus loses the ability to fly and is left to jump between tight platforms. Although none of those gameplay components ever rise to truly astounding levels of cleverness, with the neat mazes being the ones that come the closest to reaching such heights, they are all pretty competent, remaining engaging throughout the game thanks to how players will most likely be driven by the wish to prove naysayers they are wrong about Otus.

In spite of that absence of truly stunning gameplay moments, the stealth, puzzles, combats, and exploration of Owlboy do gain a dash of originality due to how they are all executed whilst airborne, and the folks at D-Pad studio certainly took advantage of their hero’s main trait in the building of levels and bad guys that are unique. The flying and the constant need to switch between partners and carry them around could have easily caused some of the riddles and traps that require sharp precision to become frustrating or even nightmarish, but Owlboy rises above those pitfalls with a very efficient control scheme.

The dual analog sticks allow the actions of moving Otus around and aiming the guns carried by his allies to be done independently, and the game gives players a nice helping hand by adjusting the reticule so that it automatically focuses on active targets once it is close enough to those, which is a flawless combination to handle a few fast-paced segments where speed, shooting, and tight air maneuvers need to be matched.

Concomitantly, switching between partners can be done – literally – on the fly via the L button. And since Owlboy has a lot of scenarios where it is necessary to temporarily drop allies somewhere, either so they can hold down a button or so that Otus can pick up an object, it is possible to immediately teleport them back to his claws with ZR, erasing all need to keep track of where they are and having to return that location so they can be recovered. 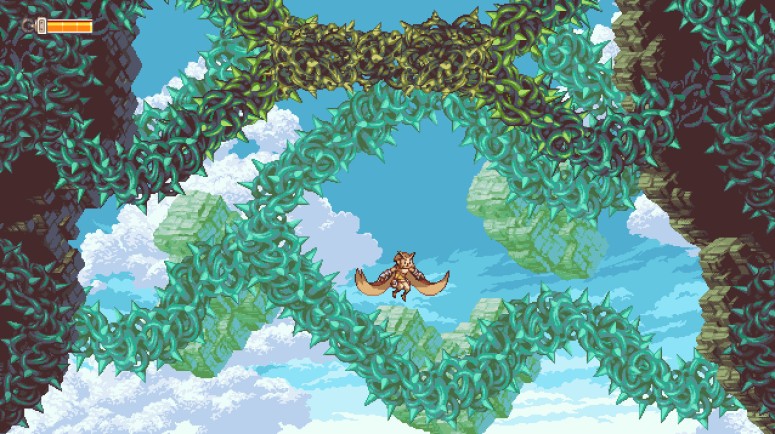 The only aspect in which it is arguable Owlboy falters a bit is in how it is completely devoid of a map system, for even if its world is not big there are a few moments in the adventure when a map displaying the current area could have been useful; namely, in the branching dungeons, and in pieces of the overworld that are wide open and feature a myriad of exits leading to different places. Ultimately, since none of those locations is truly overwhelmingly complex, they are perfectly manageable even when that kind of assistance does not exist; nonetheless, it is unlikely one will go through the entirety Owlboy without ever wishing they had a handy map.

Although not quite immaculate in story and never truly impressive in gameplay, Owlboy achieves perfect marks in its visual and musical presentation. Via great pixel art, the game gives birth to a charming world of alluring natural beauty and pretty great artistic design. Furthermore, its characters, especially Otus, are extremely expressive; the feelings of the starring owl, who has nothing but his gestures to show his reactions, are the key component of the emotional core of a game that heavily relies on being touching.

As such, the fact Owlboy is absolutely moving speaks volumes about how the game’s animators absolutely nailed Otus’ – as well as his peers’ – physical displays of fear, sadness, happiness, courage, and despair. They are blatant; they are strong; and given gamers are well aware of the inner workings of the brave soul these emotions are coming from, they are able to cut through the screen and they are bound to hit hard. And all of that affecting hurricane gains flight via a surprisingly lush and orchestrated soundtrack that conjures those feelings with great sensitivity.

Thanks to that emotional synergy between visuals, music, and writing, Owlboy tells its tale in a way that leaves robust marks. In spite of how it knows very well how to balance story and gameplay, with the latter being punctuated by the former rather than being squeezed by it, it is impossible not to walk away from the adventure of Otus and his friends without feeling that its plot overpowers everything else about it. To a point, it is true that such an impression is related to how its level design and mechanics are solid but never truly amazing.

However, the fact is that the writing and character development of Owlboy are so spectacularly done, and its story of overcoming failure, ostracism, and one’s own limitations is so moving, that it is only natural all other components that make up the game’s fabric end up playing second fiddle to Otus and his arch. Certainly, it is not the first time the tale of an outcast that is looked down on by almost everyone else is told; however, in Owlboy, the learning through defeat and alongside friends is so vivid, the feelings experienced by its starring character are so visible, and the telling of that journey through gameplay is so nicely implemented, that the magnitude of its impact seems to exist in a scale of its own.