I remember reading that boredom and creativity are connected, with the former triggering the latter, but I cannot recall a moment when I was an example of that relationship, perhaps because my work does not heavily involve creation. That all changed last Thursday, though, when I found myself without anything to play. That was when I remembered I had yet to try some Super Mario Maker 2 features that were introduced in its most recent major update, including the creation of overworlds (which the game calls Super Worlds), and I decided to give it a try.

Fifteen minutes later, when I was clumsily figuring out how to put together a Super World to house the levels I had created about two years ago when the game was still freshly released, my mind got suddenly invaded with ideas for brand new stages. Realizing a Super World can hold up to 40 courses, I then vowed I would build enough new levels to reach that total, so I could fill up my overworld completely.

After many hours and slightly over one week laying down blocks, traps, enemies, and all sorts of gadgets, I figured this would be a good place to share some of what I had come up with. Therefore, in yet another edition of Playing Miyamoto, here are the codes and descriptions for both my Super World and some of the stages it contains.

As usual, if you end up playing them, feel free to give me some feedback, since I would be happy to make the necessary adjustments to make the levels better (I have already edited and re-uploaded a stage based on feedback I got from a friend). Plus, if you want to share any of your creations, post them in the comments. I will play them and get back to you with my thoughts. 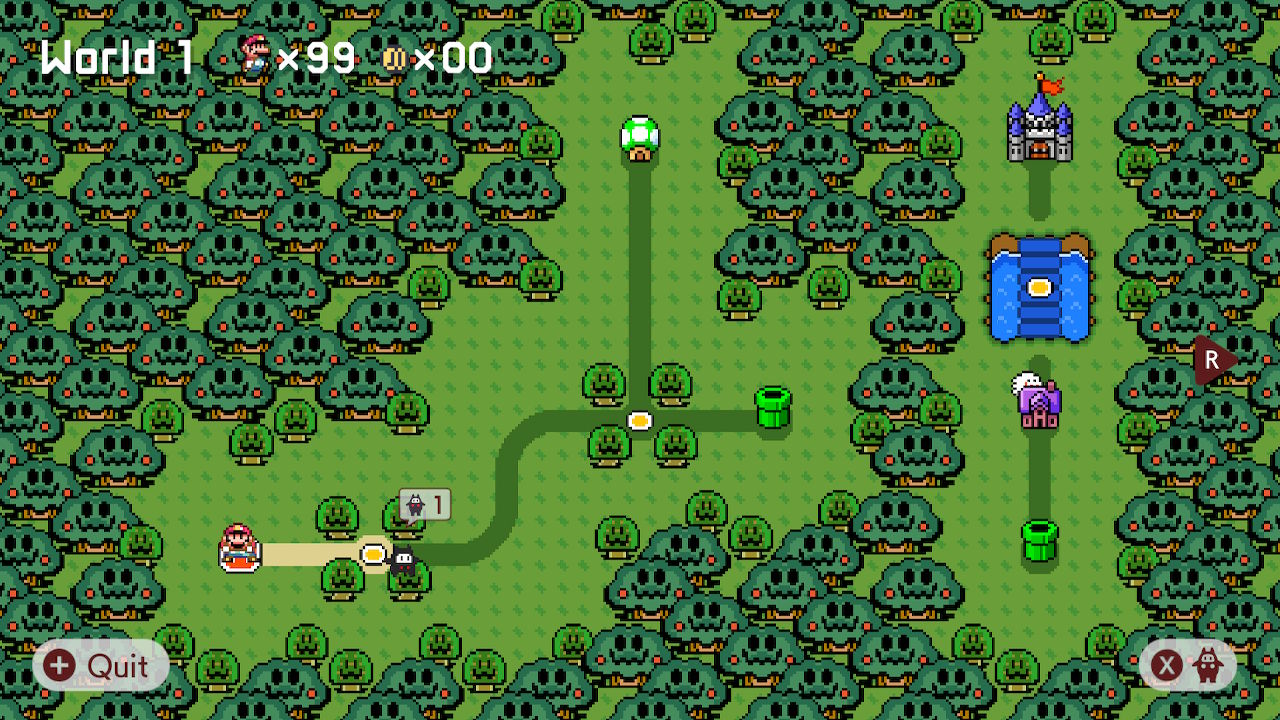 For starters, here is my Super World. It contains 40 of the 41 stages I have created so far (I left one out because it is more of a mini-game than an actual level). As someone who reviews a lot of games, I will go ahead and say there is one big problem in the design of the whole thing: the difficulty curve is all over the place because since Super Worlds were a late addition to the game, I did not actually plan my levels to feature a smooth rise in challenge.

On a similar note and on a small inconsistency that stems from the same context, Nintendo forces worlds to end in a castle or airship, but I did not really have enough of those types of stages to close all eight worlds, so only some of them conclude with levels of the sort. Contrarily, despite the fact I could not plan for a Super World from the start, I am happy to say most stages are thematically consistent with the worlds they have been placed in. 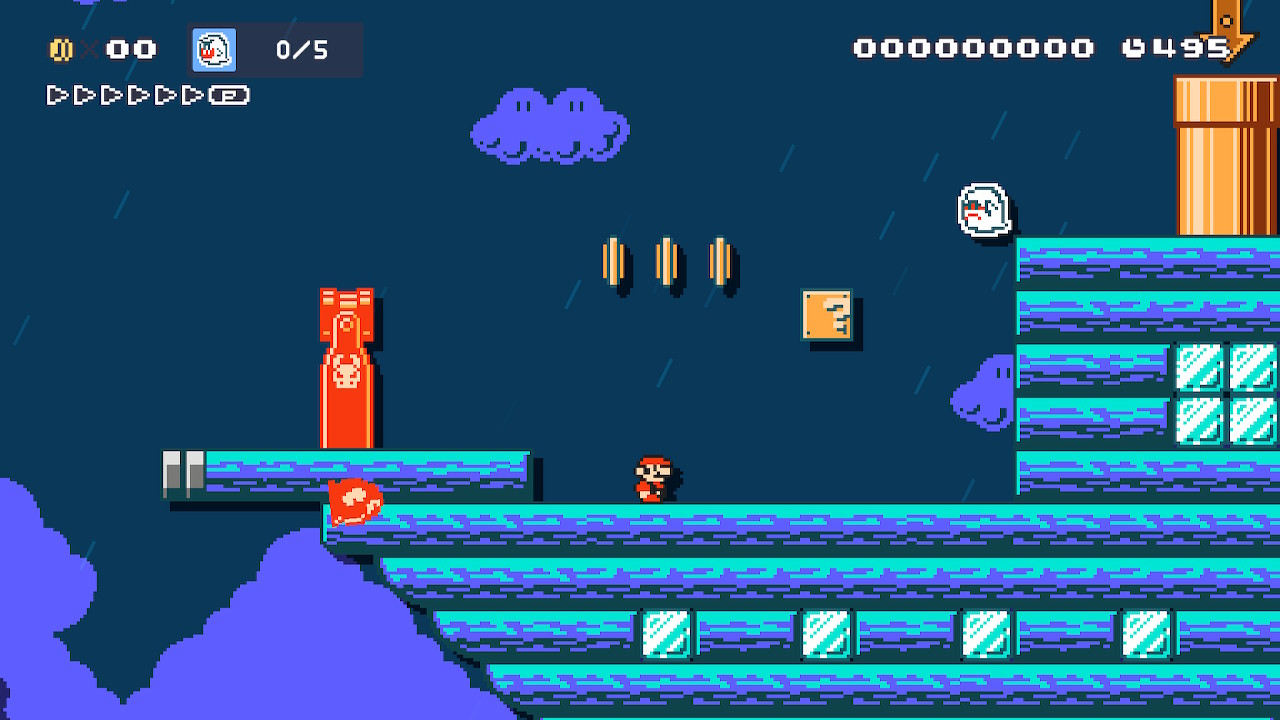 This is a haunted shipyard where the goal is killing five large Boos. Invariably, these guys are found inside the ships, with a Dry Bones shell being necessary so that Mario can eliminate them. Like many of my stages, this one involves some degree of exploration, given the shipyard is a large open area. Contrasting with that openness, the inside of the ships is made up of smaller rooms with simple challenges fully contained within one or two screens.

I specifically built this castle to serve as the conclusion for the space-themed area of my Super World. Mostly, it takes advantage of the fact that, in Bowser’s Castle, setting the time of day to night causes Mario to be able to swim through the air. I used that ability to construct a castle with tight corridors filled with lava as well as a combination of Thwomps and laser-shooting Mecha Koopas. I opted to limit myself to using those two enemies; as such, the course is a series of progressively harder challenges involving those guys. 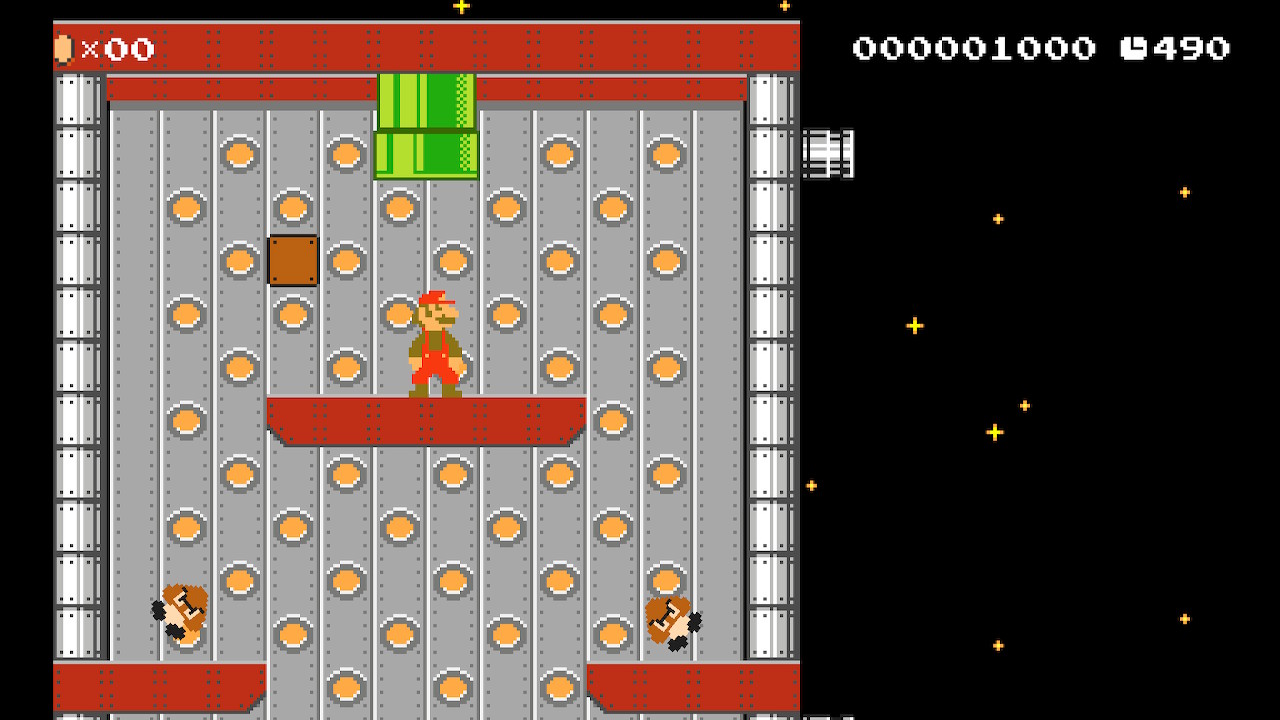 Here is yet another level built especially for my space-themed world. The airship theme of Super Mario Bros. (which did not exist in the original game) happens to have a lot of metallic structures that are perfect for a space setting. I had already played a stage that brilliantly used that feature, so I chose to copy that idea with some adaptations: while the course I went through had a lot of smaller ships, this is one large fully-connected space station. It is a pretty straightforward course that uses some switches and only two foes: Goombas and the laser-shooting Mecha Koopas that also appear in Bowser’s Anti-Gravity Well.

I had already built a course with that name on Super Mario Maker inspired by the eponymous Black Sabbath tune. I revisit it here, but with a twist: that first level was a series of platforming challenges that had Mario alternating between a sky-themed screen and the hellish-looking Bowser’s Castle scenario; this one, though, has a lot of backtracking sprinkled into it. While advancing in heaven, Mario will find these high cloud walls blocking his path. To advance, he will have to take the pipe down to hell and locate a trampoline that will allow him to jump high enough to clear the barrier. This situation plays out five times throughout the course, with each segment being harder than the one before it, be it the pure platforming seen in heaven or the exploration necessary in hell.

Created to be the castle of my ice-themed world, Snowballs and Fireballs sees Mario arrive at Bowser’s icy retreat to find it locked. He then needs to explore the surrounding area to collect five pink coins (which when gathered produce a key) so he can get into the castle and beat the Koopaling that is hanging out inside. As the course’s name indicates, the open-ended ice area involves puzzles and challenges that have Mario using snowballs, whereas the inside of the castle has plenty of fireballs as well as – of course – some icy traps as a result of the region’s cold climate. 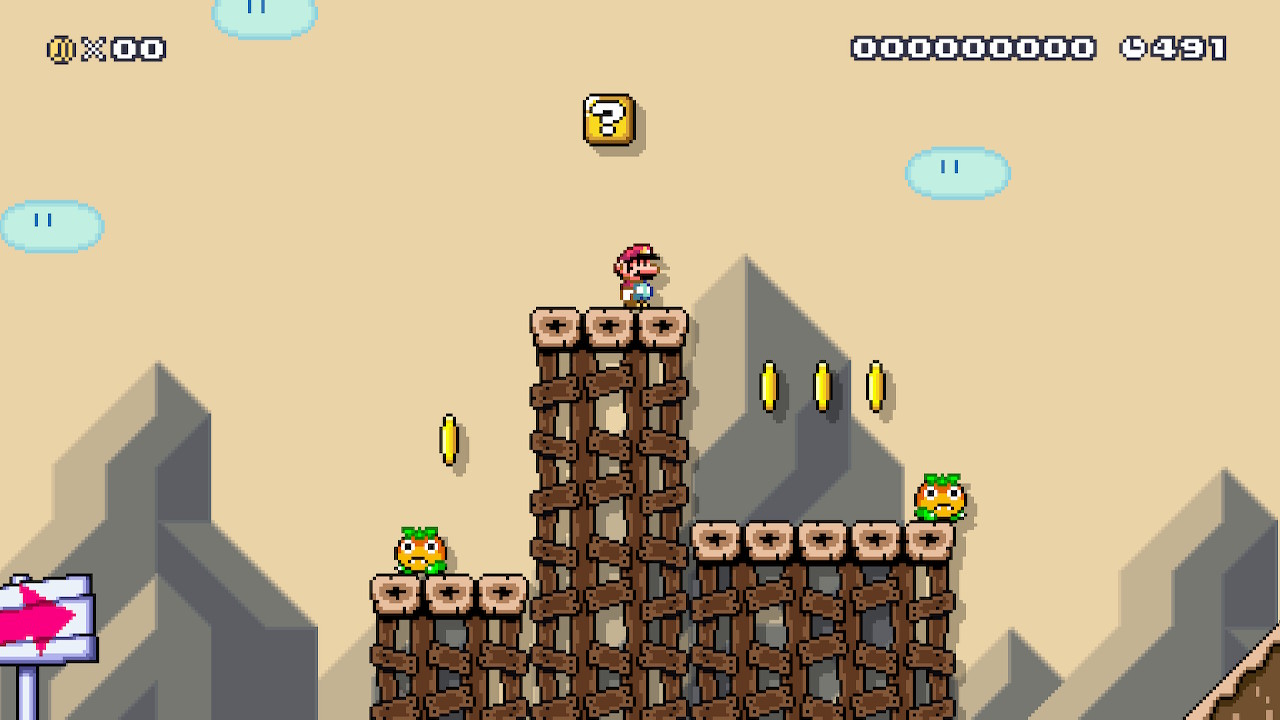 Thematically, this was inspired by a brilliant level that I played which had Mario traversing an area that looked like it was being excavated by various foes. I do not have the talent of that maker, but I went for the same vibe here while adding a twist of my own: like Heaven and Hell, this is a stage in which Mario will find his way blocked a few times (by a locked door, in this case), and whenever that happens, he will have to get inside a nearby pipe to go down into the cave being excavated in order to retrieve the missing key. 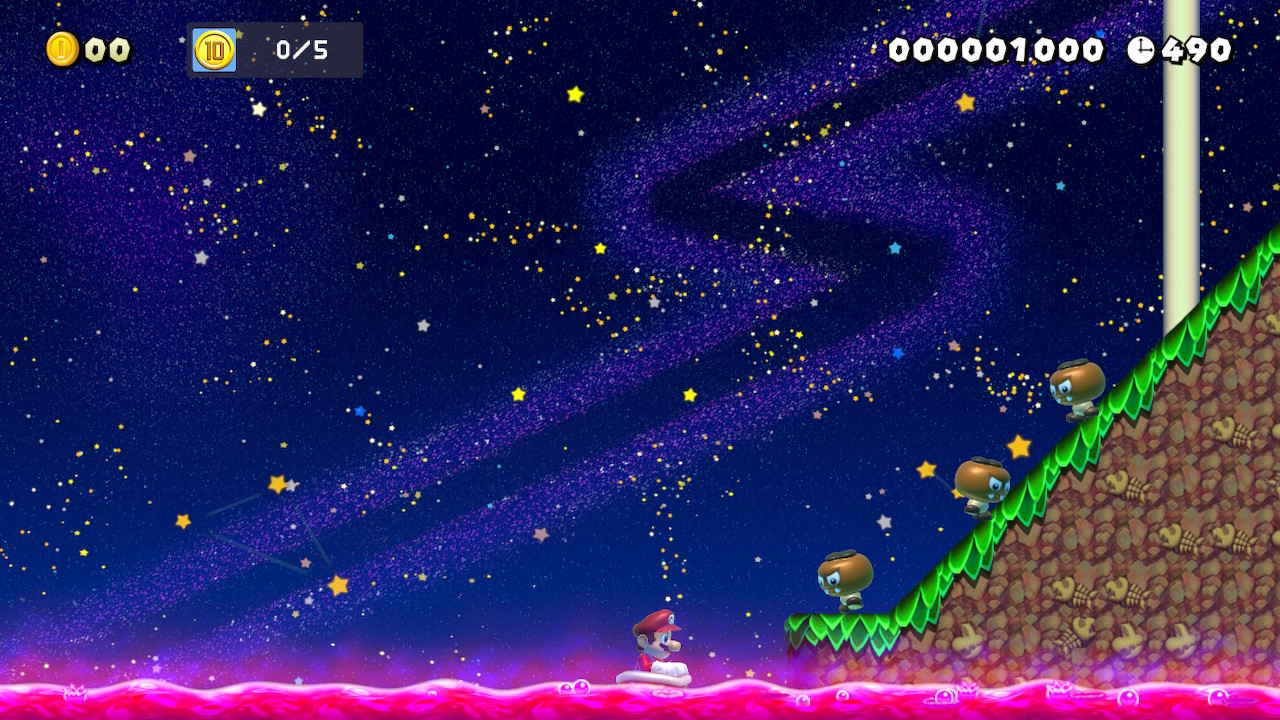 Treasure of the Starry Sea

Inspired by The Wind Waker, this level has Mario navigating a large (and toxic) sea using a Dry Bones shell as a boat. He must visit the small islands around the ocean to pick up five large golden coins. I like building stages that are wide open and exploration-focused, as I feel Nintendo does not explore that vein too much in the sidescrolling Mario games, which is a bit of a shame. Therefore, this is another one of them. I am usually very generous with power-ups in my levels, and this is no exception, but for some reason the current success rate of this level is staggeringly low, which means I may have messed up when it comes to difficulty here.

And here is yet another level whose name is taken from a Black Sabbath song. I had already played some horror-themed stages, and this is my attempt at building one. Structurally, this is similar to The Phantom Armada. Mario needs to kill five large foes which are hiding inside the village’s houses. The problem is that all homes are locked, so he needs to locate the keys before he can get in and get rid of the bad guys. Because of that, while the village is an open area waiting to be explored, the houses are tighter and more linear spaces with basic platforming challenges.