The overall charming simplicity and the generally competent level design of Mario vs. Donkey Kong make it easy to notice that the game was never meant as a grand statement or as a fierce competitor for the crown of best Game Boy Advance title, but was – instead – planned from the get go as a kind of effort that is ideal to a handheld setting. The abundance of content found in it is delightful and the way its brief puzzle-platforming stages were made to be cleared within a handful of minutes turn it into an ideal portable experience. Consequently, although it is not technically impressive, for its lovable visuals lack in scenario details and its audio leaves something to be desired in terms of quality, it is very enjoyable to play through. Furthermore, it rescued, from almost total obscurity, a gameplay idea that was tucked away in an overlooked Game Boy title and made it available to a new generation of gamers, who were able to – through it – revisit, in fresher colors and in a new expanded format, the historic duel that, from inside an arcade cabinet, put Nintendo on the map.

Ironically, even though it is more recommendable to longtime Fire Emblem players due to the fact it lacks the long introductory arch of The Blazing Blade, the steps The Sacred Stones takes towards accessibility may cause some frustration in those veterans. After all, its abundance of enemies and goods removes the stifling resource restrictions of its predecessors, making its adventure – therefore – much closer to the easier contemporary entries of the franchise than to the mighty challenges that were rather frequent in the past. That caveat aside, The Sacred Stones is yet another very good entry in the saga, and it is likely to universally please. Because, in the end, its greatness does not originate solely from the fact it adds the practicality of a world map to a well-known gameplay framework that has repeatedly proven it works well. The Sacred Stones is great, ultimately, because it joins exciting strategic battles with an engaging plot that moves through sweetness, sadness, and darkness. And when that formula is achieved, the Fire Emblem franchise is at its finest state.

In the end, Fire Emblem: The Blazing Blade was undoubtedly a very good choice for being the franchise’s first entry to be released outside of its home country. And even after the further establishment of the saga all around the world with a sequence of equally strong titles that certainly built on it, revisiting this Game Boy Advance chapter is still more than worth it for aficionados and casual fans alike. Surely, some of its traits will reveal a roughness that was neatly smoothed out as the saga developed; but, at the same time, a portion of these old-school values actually make The Blazing Blade be one interesting transitory bridge between the brutal past of Fire Emblem and the more accessible future that would lead it to universal success. And in that sense, it is a kind of adventure that cannot be tackled in many other places.

With that in mind, those who are not attracted by the measures it uses to generate replay value will most certainly find Wario Land 4 to be excessively on the short side. During the time it lasts, the game is an absolute delight, as its mesmerizing visuals, excellent level design, branching paths filled with secrets, and Wario’s incredible – and occasionally funny – deck of skills keep it all entertaining, creative, and fresh through the entirety of the journey. But it is all so enjoyable and so brief that it is hard not to get to the end without wishing there were a handful of extra levels. Regardless of that issue, the maturity, greatness, and confidence displayed in Wario Land 4 are more than sufficient to prove to anyone who gives it a shot that the series to which it belongs is not merely a platforming detour born out of the Super Mario games, but a saga strong and distinctive enough to stand tall on its own. And even if Wario Land 4 is not its unquestionable peak, it is still a highlight of the Nintendo canon.

The final chapter of a story arch divided into two pieces, Golden Sun: The Lost Age more than lives up to its position as the conclusion to one epic tale. As an immediate continuation to the adventure that preceded it, the title smartly preserves its predecessor’s visual prowess, musical quality, battle system, and gameplay staples. Yet, it is able to move forward and surpass it with style by boosting the scope of its mandatory and optional content; unexpectedly shifting the plot’s focus to the party that, in the original, played the role of the antagonists; and, most importantly, finding a way to augment the three traits that allowed Golden Sun to stand out from the crowd of role-playing games: its exploration, freedom, and puzzle-solving. Consequently, Golden Sun: The Lost Age is a work as ambitious and flooring as the Game Boy Advance is able to sustain, and in the group of RPGs released for Nintendo’s systems, it is hard to come across a game that is as good, because the balance The Lost Age presents between being traditional and breaking away from the mold is a rare and pleasant sight.

Thanks to localized improvements that work towards reducing both frustration and excessive backtracking, and due to a team of developers that knew how to look at the past in order to learn from mistakes that had been previously made, Castlevania: Aria of Sorrow guarantees its place as the finest entry of the franchise for the Game Boy Advance. In addition, by implementing a very creative system of spells and magic that turn the soul of its many enemies into collectible and usable assets, the game carves out not only a personality of its own, but also a very noble place inside the long-running franchise of vampire hunters. Through those means, Castlevania: Aria of Sorrow is recommendable without reservation, for even though it does hold a few points that could have been smoothed out, it is a haunting quest that is fun and engaging through the entirety of its run, and a culmination of a three-year cycle that produced a trio of appealing Castlevania games.

Castlevania: Harmony of Dissonance does have a couple of issues that make the size and complexity of its scope, which are undeniably its biggest qualities, not be as thoroughly delightful as they could have been. Still, by implementing punctual improvements in areas where Circle of the Moon was lackluster, and by embracing the intimidating value of its twin castles and turning the navigation of its map into its biggest source of challenge, the game succeeds in presenting a very satisfying and somewhat original take on the non-linear facet of the Castlevania franchise. Due to that trait, Harmony of Dissonance is bound to enchant anyone with a love for meticulously exploring a large map and using their wits to figure out a world that is itself one massive puzzle. To anyone else, though, its abundant intricacy, its frequent backtracking, and the long distances it sometimes forces players to traverse may be a bit too much.

The punctual flaws that it displays in the main components of its fabric turn Circle of the Moon into a Castlevania installment that is good, but not great. The transplant of the Symphony of the Night formula into a portable is, in a way, a success, because the marriage of non-linear exploration and RPG elements makes traversing Dracula’s fiend-infested castle an appealing experience filled with discoveries, secrets, challenge, and unguided progression. However, the game could have certainly been more careful with the way it handled its elevated level of difficulty, its visual presentation, and the implementation of the central gameplay mechanic that it builds to call its own. With those problems in mind, Castlevania: Circle of the Moon cannot be universally recommended, as the Game Boy Advance itself holds a couple of entries of the franchise that are easily superior to it. Nevertheless, there is great enjoyment to be found in its imperfect Gothic quest if one has fondness for lack of linearity, is able to ignore its shortcomings, and can deal with some moments of grinding. 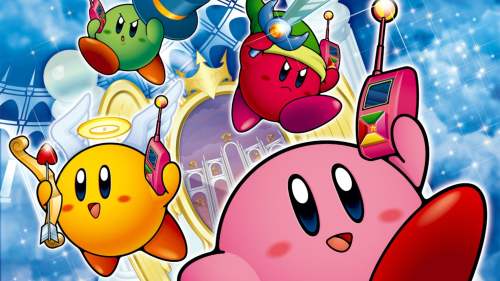 Independently of those shortcomings, which are likely the result of how the game marks the franchise’s first full-fledged foray into a fully explorable and intricately connected map, Kirby and the Amazing Mirror is a standout entry in the series. Not just because it boldly throws the character inside a large world with no guidance whatsoever, but also thanks to how it preserves the loose and light fun the pink hero is known for while presenting it in a rather distinctive format. And even if it is arguable the maze-like inspirations of its areas act against the all-encompassing accessibility the property is known for, the game succeeds in making its progression approachable for all ages. Kirby and the Amazing Mirror is, then, a well-executed and brilliant detour, as it finds balance between the characteristics expected from a Kirby game and new features that create its identity. As such, the result could not have been much different, as the adventure is one of the saga’s most notable peaks.

Advance Wars 2: Black Hole Rising is still a blast, though. It is a fun, engaging, and challenging game whose value is a sight to behold. It may feel far closer to an expansion pack than to a true sequel, but it is a must-buy to either those who greatly enjoyed the original and are looking for more missions of deep strategic values pained with a charming cartoonish look or those that want to get to know the franchise and feel like starting with its most complete and well-presented installment.