In its endless ambition and megalomania, Banjo-Tooie builds the most complex, demanding, and satisfying take on exploratory platforming 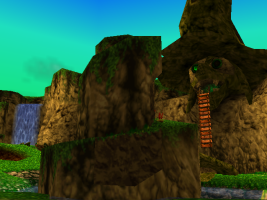 Bigger is not a synonym for better. Banjo-Tooie, however, manages to build a compelling argument to support the joining of those two terms in a thesaurus. Tasked with the goal of topping Banjo-Kazooie, a game that – two years earlier – had ran laps around every single 3-D platformer released up to that point, Banjo-Tooie looks towards sheer megalomania for inspiration, and – in turn – creates one of the most immense, demanding, and fun adventures the Nintendo 64 housed during its run.

With Gruntilda buried beneath the earth under a massive boulder, Spiral Mountain seems to be at peace. Things go awry, though, when on a rainy night, while the titular pair enjoys a card game alongside Bottles the mole and Mumbo the shaman, the now bony witch is freed by her two sisters and seeks immediate revenge by blowing up the bear’s home and wrecking havoc. Able to escape the spell she sends their way, the heroes set out once more to stop the hag, who wants to recover her body by harvesting energy from the land via a huge weapon of cartoonish proportions.

From the outset, Banjo-Tooie is quick to let players know it retains the fantastic mood of its predecessor, where underlying darkness is covered with colorful scenarios and tongue-in-cheek jokes that brilliantly walk the tightrope between surprisingly offensive and clever. A destroyed Spiral Mountain, the geographic link between both games, serves as the starting point of the quest and, backed by sad music that follows death and destruction, the bear and the bird go on their way.

Gruntilda still has knack for ridiculous rhyming. Kazooie, meanwhile, is at the top of her mocking verbal skills and offers no mercy to the huge cast of characters she meets. Much to the horror of the good-hearted Banjo, and to the delight and laughter of players, her scornful ways are as wonderful as ever: she often breaks the fourth-wall by calling out predictable and clichéd occurrences, takes advantage of the innocence of most creatures to spin derisive comments, and employs a harsh sincerity that is brutal and witty. Banjo-Tooie is utterly hilarious, and every one of the game’s interactions between characters serves as an opportunity for Rare to flex their comedic muscles with success.

The wisest move made by the game, and one that supports its greatness from the very beginning of the first world until the final boss, is assuming that anyone who is playing Banjo-Tooie has already been through Banjo-Kazooie. It is not that the title is unaccessible to newcomers, the reality is far from that: the gameplay is easy to pick up and the plot simple to follow. Banjo-Tooie, however, does not bore those that experienced the first game by retreading to previously explored grounds.

For starters, the incredible abilities that transformed Banjo and Kazooie into a Swiss Army Knife are fully available as soon as it all begins. Launching eggs, flying, performing high jumps, and executing different attacks are all ready for use, meaning that – in order to add new ingredients to the mix – the game chooses to build upon that already impressive arsenal.

Although a good number of the new moves are pulled off as a duo, most skills scattered through the worlds derive from one of the game’s finest new features: the fact Banjo and Kazooie can split-up by using a pad, which allows Banjo to extract versatility out of his empty backpack and Kazooie to gain incredible agility due to not having to carry the bear. It is a nice twist that opens up numerous doors leading to clever level design, and allows the two characters to either work by themselves or collaborate separately to achieve a mutual goal.

The other, and by far the most important, consequence of the assumption that anyone going into Banjo-Tooie is reasonably experienced in the franchise is the difficulty of the eight worlds encountered here. While Mumbo’s Mountain, the first scenario of Banjo-Kazooie, can be reasonably cleared within forty minutes by a relatively good player; Mayahem Temple, the initial Banjo-Tooie level, will require anywhere between one and two hours of exploration and problem-solving.

Many are the reasons behind the considerable amount of time each world demands. Firstly, Banjo-Tooie has more collectibles than its predecessor. The ten puzzle pieces, five Jinjos, and one-hundred musical notes placed on every level make a return, albeit with very positive changes regarding the last two items. In addition to those, there are also three empty honeycombs, which are used to increase the pair’s energy meter, and three Cheato pages, which unlock varied cheats, waiting to be found on each new scenario the heroes explore.

Musical notes are now found in groups of five plus a well-hidden special bunch of twenty, as opposed to the meticulous individual collection of Banjo-Kazooie. More importantly, though, while on Banjo-Kazooie notes and Jinjos gathered were lost upon either leaving the world or dying, such annoying anomaly no long occurs here, hence erasing the previous game’s sole source of frustration.

The second reason behind the pleasant inflation of the game’s general length comes from the scope of the worlds. Aside from being enormous, the intricacy of their structure is often mesmerizing; therefore entailing a much more careful exploration. Thankfully, realizing that traversing those expanses multiple times could get boring quite quickly, developers wisely placed a good deal of warp points around the stages, allowing players to travel between major areas in the blink of an eye.

As an improvement over Banjo-Kazooie, whose worlds sometimes drifted into predictable platforming themes, Banjo-Tooie is far more creative in that regard. Starting from a setting of Mayan inspirations, with a rock pyramid as its centerpiece, the game travels through a wonderful land where dinosaurs are not extinct, a theme park of dubious maintenance, a tall industrial building, a mountain split into a fiery and snowy halves, and even a lagoon whose underwater sights are not only gorgeous but also a joy to play through, creating what is perhaps the greatest water level to ever appear on a platformer.

The jiggies located on each world require a great deal of effort to be tracked down. Whereas on Banjo-Kazooie getting the game’s ultimate rewards usually involved getting to a place and performing a certain simple task, on Banjo-Tooie most puzzle pieces demand a longer checklist of activities that are only figured out after attentive investigation and sharp reasoning, and the rewarding nature of that ride keeps players glued to the screen for surprisingly long gameplay sessions.

The game’s greatest victory is something that no other platformer of its kind has ever come close to achieving. Like it happens on games of the genre, the worlds are accessed through a large overworld. Banjo-Tooie, however, adds an amazing twist to that structure. The worlds are not fully independent: they are actually linked not only to the overworld, but also to one another. From an atmospheric perspective, that trick makes the adventure’s setting feel like one gigantic world instead of a series of interconnected isolated levels, a sensation that is augmented by the existence of a train that can be used as a mean of transportation between the stages.

Those connections, however, are not there just for show and world-building; they serve a purpose. A minor part of the game’s puzzle pieces are only reached by solving troubles that can only be addressed by transporting items and characters between stages, activating interactions between the worlds, or even taking alternate paths that will allow Banjo and Kazooie to get to places that would have been inaccessible from the very world they are located in. For example, one specific jiggy is only acquired by saving a prehistoric tribe from starving to death, something that can only be achieved by giving them junk food received in another world.

As if that extensive collaboration between stages, which had never been done before and has never been replicated since then, was not enough, Banjo-Tooie takes it to a whole new level by sometimes presenting players with riddles and challenges that can only be cleared by an ability found on a future yet-to-be-unlocked world. Naturally, it is a strategy that imposes a good deal of backtracking not to mention the ability to understand that doing the task with the duo’s current set of abilities is impossible. It is the odd meeting between a 3-D platformer and Metroid, and the creature born out of that fusion is gorgeous.

Banjo-Tooie does offer some more straightforward puzzle pieces; actually, most of them do not require such interactions between levels. However, the fact that all worlds, without exception, feature between one and three jiggies that are only acquired either via backtracking or by triggering inter-world exchanges will undoubtedly put off players who like their platformers to be simpler. To the ones who do not mind, though, Banjo-Tooie will be endlessly engaging and astonishing in jaw-to-the-floor ways.

Through the nearly thirty hours it takes to full completion, the game never goes stale. Brand new gameplay ideas bloom from every corner. The transformations, one of Banjo-Kazooie’s best features, but one that only appeared punctually, have been expanded and have grown more important. There is one for every world and the duo will become anything from a TNT detonator to a washing machine. Additionally, while on Banjo-Kazooie they were only useful for one specific goal, on Banjo-Tooie they are always involved in the reaching of more than one of the collectibles; hence making them far more important.

Bosses, which are a bit on the easy side, are also frequent and very creative; fun mini-games and a few first-person shooting segments, where Kazooie is held like a weapon, albeit one that shoots eggs, are a pleasant detour and can even be enjoyed separately on an unexpectedly strong multiplayer mode; and Mumbo himself, once restricted to his hut and to turning the heroes into animals or objects via his magic, is now fully controllable and must be used to perform spells around the stage to help the heroes advance. The game has a bag of tricks that matches the size of its unstoppable megalomania.

On the technical front, as a title that came out on the tail end of the Nintendo 64 era, it represents the peak of what the console was able to do without the expansion pack, even matching or bettering games that made use of that device. The models are flawless and surprisingly improved, but Banjo-Tooie’s greatest visual features are undoubtedly its lighting, which includes precise shadows, and its very complex animations. All that ambition combined with the size of the worlds, though, occasionally takes a toll on the game, as the framerate will dip when there is too much going on. However, given the game is short on action and heavy on exploration, that issue is not frequent enough to be irremediably annoying. 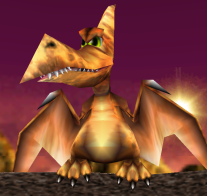 When it comes to its sound, Banjo-Tooie follows on the footsteps of its predecessor by offering a very whimsical and dynamic soundtrack and sound effects that are highlighted by the humorous gibberish spoken by the talkative characters.

In its endless megalomania, Banjo-Tooie tops Banjo-Kazooie by a considerable margin. What was once a stellar game turns – when infused with punctual fixes, the addition of clever ideas, and the expansion of others – into one of the biggest and most ambitious games the world has ever seen. Everything it tries to do is positively enormous, and although some will turn away due to its grandeur, those who fall in love with its desire to build one interconnected all-encompassing world by linking its stages together and sprinkling big amounts of backtracking into the formula will find unparalleled levels of satisfaction on its exploration and puzzle-solving. Banjo-Tooie is one-of-a-kind, and its gigantic and demanding ways have yet to be duplicated.