If there is any truth to the motto which claims that practice makes perfect, then Yoshi’s Woolly World is Good-Feel’s opportunity to sharpen their ability to weave levels centered around the concept of a world made of cloth. The company’s second incursion into a universe of fabric and needles, following Kirby’s Epic Yarn for the Nintendo Wii, is the first Yoshi game to hit a home console in seventeen years; and even though following a title with the mixed credentials of Yoshi’s Story is not exactly a pressure-laden affair, the towering ghost of Yoshi’s Island is always lurking around the corner as a high bar against which all titles featuring the green dinosaur must be measured.

As it turns out, and contrarily to what most reviews out there will make one believe, with one world already cleared in my personal journey through this vortex of colors and cuteness, Woolly World comes off as a resounding success in the two fronts it approaches. Firstly, as a spiritual sequel to Kirby’s Epic Yarn, it feels like a more confident and better-designed product, which is saying a lot considering the quality of that title.

The cloth-related mechanics are better integrated to the aura of the Yoshi franchise. They do not drastically alter the series’ gameplay like they had done – to the dismay of many fans – to Kirby, which was stripped of his signature sucking and power-hijacking skills.

Instead, they add fuel to the mechanics that were already set in place. Yoshi’s tongue is a natural weapon for unraveling knots and revealing hidden passages. Likewise, his eggs – now transformed into differently colored and sized balls of yarn – are used to either bind more aggressive enemies, such as piranha plants; or quickly weave platforms and other elements that occasionally show up as mere bare-bones structures, adding a bit of a satisfaction-inducing Okami-like restoration undercurrent to the gameplay, as stages sometimes transform thanks to Yoshi’s actions.

Secondly, as a successor to Super Mario World 2: Yoshi’s Island, Woolly World hits that title’s two greatest legacies right on the head: its overwhelming visual cuteness, and its level-design greatness. The former is blatant to anyone who is willing to give any of the game’s screenshots a look; Woolly World is a never-seen-before explosion of adorableness, colors, and astonishingly brilliant scenario and character model design. It is a Nintendo big bang where microscopical details assembled with yarn and needles come together to form a uniform fabric of visual delight; a sight to behold.

Meanwhile, the level-design greatness quietly sneaks on players that might come in expecting yet another dully designed package of Yoshi levels. Before the first world’s halfway point, Woolly World will already be moving full-steam ahead, especially to those with a completionist inclination to go after its many collectibles. With nine levels into the adventure, Yoshi has already gone through a forest of bouncy trees, faced bomb-wielding Shy Guys, stormed a fortress where swinging balls of yarn and tilting cloth platforms are prominent, reconstructed the windmills of a gorgeous valley, surfed waves, and transformed into an umbrella and even a speeding motorcycle. 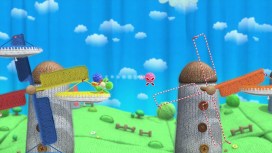 Like the best Nintendo games, Yoshi’s Woolly World – thanks to its collectibles – smartly navigates the waters between undeniable accessibility and pleasant challenge, and while doing so it delivers glorious amounts of visual candy and varied – yet constantly engaging – platforming. If it keeps yielding such spectacular goods with that same consistency all the way through, it will be easy to call it one of the finest Wii U games.

10 thoughts on “Yarn And Needles”